NHL News : Matthew Tkachuk and James Neal drop the gloves in the Battle of Alberta. 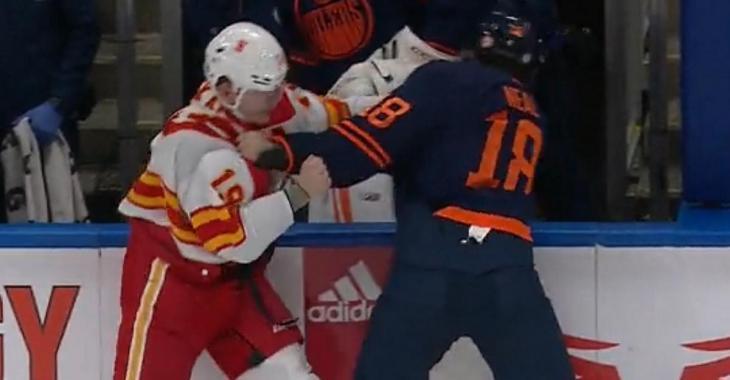 If the Battle of Alberta had not reached its full potential yet this season then on Saturday night it certainly did.

The Edmonton Oilers and the Calgary Flames battled it out in what turned out to be a very close game, one that would eventually be decided by a late goal from Oilers captain Connor McDavid. Although the Oilers would eventually walk away with the win there was no doubt that fans from both teams were glued to their seats the entire time with plenty of action at both ends of the ice, and perhaps more importantly plenty of physicality.

There was perhaps no better example of the genuine hatred between these two teams than the first period scrap that occurred between veteran Oilers forward James Neal, and Flames star forward Matthew Tkachuk. It was clear that Tkachuk was targeting Neal early on in the game with an attempted hip check that failed and eventually led to a crosscheck to Neal, but to his credit Neal demonstrated early on that he would not be bullied around the ice.

Although it initially looked like both men were headed off the ice to make a change after this exchange, words must have been exchanged or something must have been said that resulted in both men turning away from their respective benches. At that moment both Neal and Tkachuk turned to face one another and both men agreed to drop the gloves, leading to one of the more spirited exchanges of the night.

To be completely honest here, both men seemed to struggle to land any real offense against their opponent. Although there was no lack of effort, it looked like both these guys gave it their all, they also both had a firm grip on one another's collars making it difficult to connect with any kind of solid blow. Instead a lot of the punches being thrown by both Neal and Tkachuk would glance of the lead arm of the other, or off the shoulder pads of their opponent as they tried to loop their punches around.

Nonetheless a great showing from both men, and no doubt a sign of things to come with these two teams facing off several more times in this season's unique schedule.