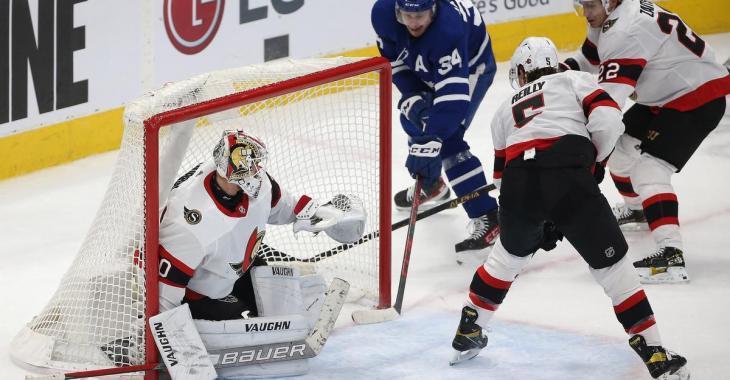 We’re pretty sure Ottawa Senators goalie Matt Murray wants to forget about Thursday night’s game. Unfortunately for him, we have to talk about it again.

In another game against the Toronto Maple Leafs, the Senators turn to Murray after he took over for backup Marcus Hogberg left the contest with a lower-body injury.

Clearly, Murray had not come prepared to play that night. He acted like he had the night off even in the crease. On 26 shots, the two-time Stanley Cup champ let in six goals in Ottawa’s 7-3 loss to Toronto.

This prompted former NHLer Matthew Barnaby to rip the poor goalie apart with a brutal comment on sociale media: "Matt Murray must be great at dodgeball."

The Senators paid big money to land Murray’s services in the offseason, signing him to a  four-year, $25 million contract, but he is not meeting expectations… He has put up a 2-9-1 record with a 3.82 GAA and .878 save percentage so far this season…

He however took the blame for the loss after the game as he faced media with courage for such a pitiful performance.

“Bottom line, this one’s on me. For sure, it’s tough going in like that, but that’s not an excuse. I think I could have done a better job and given us a chance to win.”

Let’s see if this pushes him to play better.

Nathan MacKinnon says the Habs have one of the NHL's most underrated players.