NHL News : Mark Scheifele could get fined by the NHL for his comments on suspension!

In his postseason press conference, the forward reacts to the league’s decision to suspend him and only playing one game in the series. 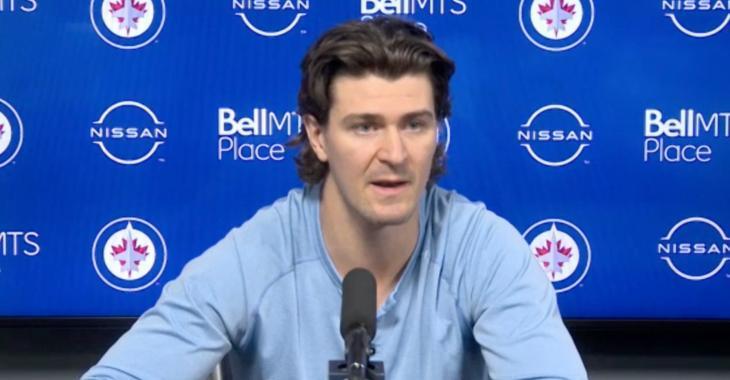 On Monday night, the Winnipeg Jets’ season came to abrupt end as the Montreal Canadiens completed the sweep in overtime. And there’s nothing star forward Mark Scheifele could do about it…

Scheifele was suspended four games by the NHL Department of Player Safety for charging Habs forward Jake Evans in the third period of a 5-3 loss in Game 1. The Jets never got over his loss as the team’s offense dried up without Scheifele.

On Wednesday, the Jets players met with media members in a video press conference to talk about the playoff elimination and what’s next for the team. Scheifele was of course asked about the suspension. He had to be careful with his reactions : he even mentioned he does not want the NHL to fine him for his comments!

That’s because Boston Bruins head coach Bruce Cassidy made headlines on Tuesday as he was fined $25,000 for publicly criticizing the officiating of his team’s second-round series against the New York Islanders. Cassidy’s comments came after Game 5 on Monday, a 5-4 Islanders win that gave New York a 3-2 series lead. He commented on what he believes to be inconsistent calls from the series’ officials, and suggested it is due in part to the perception of how the Islanders play.

This is what Scheifele said about his suspension:

“I thought I was going to be tried to be shut down by Phillip Danault,” says Mark Scheifele. “Instead it was department of player safety that shut me down.”

“They knocked me out of the series, I didn’t even get a chance to play with my teammates...”

“I’m going to stop talking before I get fined or something like that.”

Reporters were quick to notice that Scheifele was getting upset in his presser as he went off on media when asked about his head coach Paul Maurice and fans’ expectations.

“We proved you guys wrong all season long.”

“We were written off from day one of the season and we proved people wrong all season long. We go through that slide towards the end of the year and we were written off again … We don’t get a lot of respect in the grand scheme of things.”

We can understand that Scheifele is upset with the sweep and his suspension, but as Habs insider Arpon Basu for The Athletic points out, he might have shut himself down in the end…

Three trade deadline targets for the Toronto Maple Leafs.
Subscibe to
Our NEWSLETTER
Receive the best articles of the web directly in your email