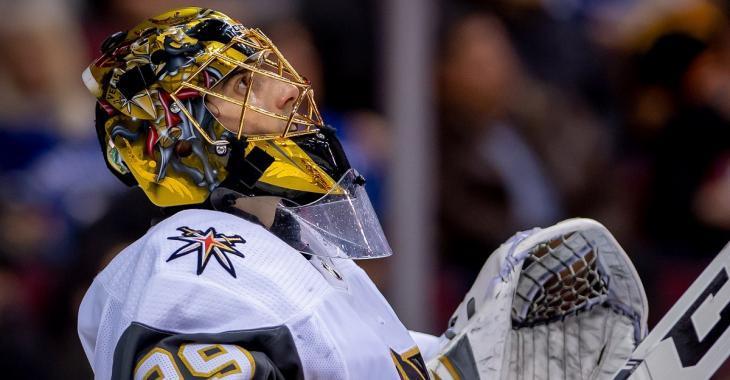 Las Vegas Golden Knights goaltender Marc Andre Fleury is perhaps the most universally beloved player in the entire National Hockey League. Although his struggles on the ice have at times drawn criticism at different points in his professional career, I don't think I've ever heard a single fan, pundit or player ever speak ill of the man on a personal level. It is perhaps for this reason more than any other that when Fleury suffers, his legions of loyal fans suffer right alongside him.

Although things look great on from the outside looking in, Fleury is having a career best season with the Golden Knights, it hasn't always been easy for the veteran goaltender who suffered terribly in 2020. Fleury not only would lose his starting job to goaltender Robin Lehner but just one month before the start of that year he lost his father, Andre Fleury. Having had some time to process  the loss at this point, Fleury opened up about just how rough things have been when he spoke to ESPN's Emily Kaplan.

"Obviously it's on your mind, right? I was always thinking about him," Fleury said as per ESPN. "Sometimes I wish I could have been there more for him, because you're always on the road. He was in Quebec, and my sister was with him."

Fleury's father died of lung cancer at the age of 63, a condition that unfortunately often affects smokers like Andre Fleury. What makes it even more sad is that he had quit smoking some time before the diagnosis.

"He stopped many years ago," Marc-Andre said. "But I guess the damage was already done."

Thankfully his recent run of success, his family life and his children, and the sport of hockey have all helped him keep his mind off that terrible loss, but Fleury admits that is not always possible.

"But sometimes you stop and think about it, and it's still surreal that he's gone," he said. "And I won't get to see him in the summers when I go home. That's really hard."

Now Fleury carries a quote from his father on the back of his helmet, words of inspiration that his father often spoke to him when he was still around

"Keep your eye on it," reads the quote which is written in French. "You practice as you play. Have fun."