It's clear that Flower's heart is still in Vegas. What a major blunder... 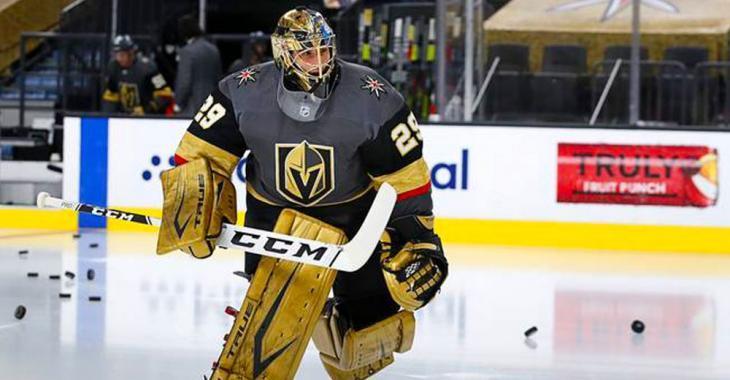 Chicago Blackhawks goaltender Marc Andre Fleury is finally opening up for the first time on what exactly happened between him and the Vegas Golden Knights this offseason that essentially saw him get traded for nothing.

The trade in and of itself was shocking, but the details surrounding it make it so much more shocking. Don't forget that Fleury is the reigning Vezina Trophy and has a legitimate case as the best goalie in the NHL. So, if that's the case why did Vegas drop him like a sack of dirt?

“We had a year-end meeting right after the playoffs and we talked a bit about it. It’s something that had been in [rumors] a lot,” Fleury said to NHL insider Frank Seravalli. “But at the time, Kelly said he was going to look at all of the options. I think I then called him in early, mid-July to see what he was thinking, which way he was leaning. At the time, he wasn’t sure. He was listening to teams. He didn’t have a direct idea of what he wanted to do for next season. My agent had talked to him after the Draft and at that time, too, he was still unsure of what he wanted to do.

“Then I found out a few days later that I got traded.”

Talk about being blindsided! Fleury's agent, the notoriously outspoken Allan Walsh, was sickened at how things were handled.

“The fact the trade call may not have been completed is a weak excuse,” Walsh told Seravalli. “I’ve had plenty of calls from GMs on trades before the trade call was finished. ‘Flower’ was the face of the franchise, Vegas was everything to him. You think about honor and integrity, all that the Golden Knight stands for as the owner said. You would think someone would call and say: ‘Marc-Andre, we just want you to know we have a verbal agreement to trade you. We can discuss more later but just want to show you the respect of letting you know direct from us. Thank you for everything.’ It only needed to be 30 seconds. Flower had earned at least that much respect.”

While Fleury would go on to talk about a new opportunity in Chicago, it's clear that his heart is still with Vegas.

“I was there from the start and trying to help the team get going,” Fleury said. “You make a good connection with players and staff and the fans. I feel like I tried my best to create that environment at the rink – or outside with fans and stuff. I’m glad I did. You know, it was one of the best experiences I’ve had in hockey.”

“I thought I was going to retire there,” Fleury said. “The owner said it in the media last season, too. I know I don’t have many years left [to play], so I thought I could end up there, living there after hockey.”

Oof... if that doesn't pull at your heart strings nothing will. Here's hoping that Fleury at least gets the opportunity to go out on his own terms.