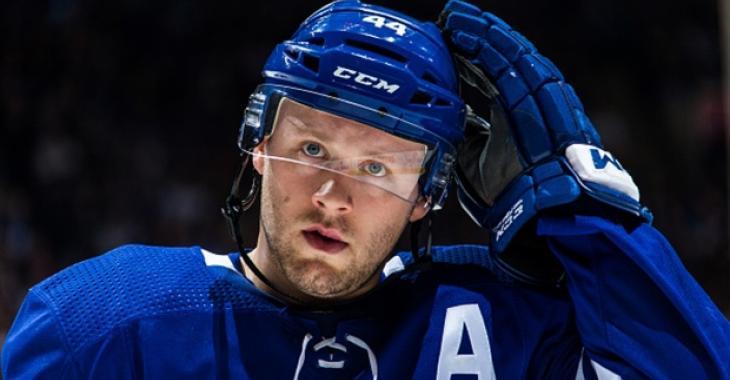 There is a huge problem on the horizon for the Toronto Maple Leafs. Morgan Rielly has one year left on his contract before he’s eligible to enter the free-agent market and let’s say that his value, which was already pretty high seeing what he brings to the team, has grown exponentially with the latest signings of defensemen across the National Hockey League.

Last week, we saw crazy numbers come up on contracts of free-agent blue liners. We saw how much it took the New Jersey Devils and Chicago Blackhawks to sign Dougie Hamilton, and Seth Jones, respectively, who both who pushed their cap hits to $9M AAV or higher. And we can only add to this list  RFAs like Cale Makar, Zach Werenski, and Miro Heiskanen also made it clear values of top defensemen were high across the board.

This even prompted insider Arpon Basu of The Athletic to suggest that there is no way Charlie McAvoy of the Boston Bruins won’t do the same or even better when it’s time to re-sign.

Basu believes that there is no way that McAvoy, who is a restricted free agent with arbitration rights next offseason will be “signing for less than $10 million a year at this point.”

Now this is what comes as a problem for the Maple Leafs. Can you imagine the kind of raise Rielly will be expecting with these contracts out there?! Sure, Rielly once said that he would be willing to take less money in Toronto to spend his career as a Leaf and win in Toronto. Leafs insider Jonas Siegel for the Athletic recently analyzed what should be expected to be offered to Rielly using players with similar offensive defenseman statistics, age, and experience.

“If we simply take the average of these 11 comparables, he would be due roughly 8.86 percent of the salary cap — or $7.22 million per season.

That’s a pretty fair “open market” valuation for the contract Rielly would receive as a UFA, one that would likely be for the maximum seven years (with a new team). Especially if you consider a UFA deal would be signed a year from now when Rielly’s games played and point totals would be higher — and toward the top end of this group.”

Toronto currently has about $13.7 million in available cap space for next season.

But the new numbers out there, you cannot blame the guy for wanting to go out there and see what other teams are offering! And the Maple Leafs will only be able to offer till a certain, and most likely, lower numbers. It will all depend on the length of the contract as well… the Leafs have to determine how much they will offer an aging Rielly.

But general manager Kyle Dubas can not let him walk away for free. He needs to sign him to an extension quickly or trade Rielly for assets in return. As EditorinLeaf points out:

“Rielly is 27 years old and is making $5 million this season. He’s a top defenseman who currently has one of the best value contracts in the NHL, if the Leafs wanted to trade him they should be able to ask for a lot in return.”

A lot of questions for the Maple Leafs when it comes to Rielly’s extension. How much does he want to stay in Toronto and at what price, what could be offered on the market, and what will his value look like after the upcoming season?

Interesting to see where this leads to… and if this will get done shortly.