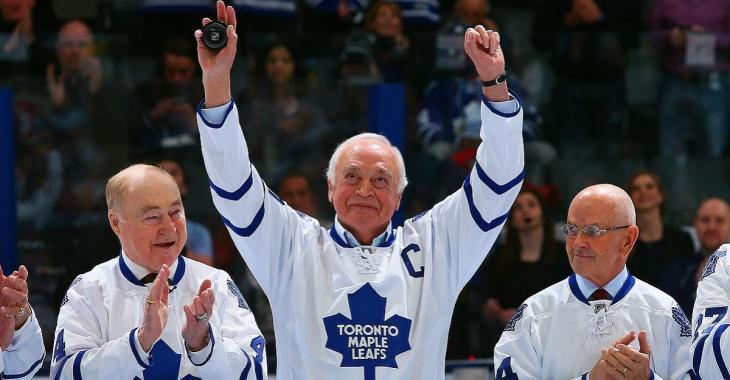 We have some sad news to share with you today.

On Sunday morning the Toronto Maple Leafs announced that former Maple Leafs captain George " Chief" Armstrong had passed away at the age of 90. A career long member of the Maple Leafs, although he did play for the Pittsburgh Hornets of the American Hockey League as well, Armstrong will be best remembered for leading the Maple Leafs to Stanley Cup glory on 4 separate occasions during his career.

Unsurprisingly Armstrong's success on the ice, which spanned a career of 1188 games that saw him record 296 goals and 417 assists for 713 career points, eventually led to him being named captain of the franchise. Armstrong would lead the Maple Leafs as their captain for a whopping 13 seasons, and was named to the National Hockey League's All Star game on 7 different occasions as well.

Although Armstrong will be most commonly remembered for his contributions on the ice as a player, including being the last player to ever score a goal in the 'Original Six' era of hockey when the Leafs won the Stanley Cup in 1967, he also served in various roles within the Leafs organization after his playing career. Armstrong served as a coach and even as an assistant general manager within the Leafs organization and was considered by many within that organization to be a 75 year long member of the franchise. Armstrong also briefly served in a front office role as a member of the now defunct Quebec Nordiques, operating as a scout for that franchise.

In 1988 the Maple Leafs honored Armstrong's number but later went a step further during a big ceremony in 2016 in which the Leafs retired 11 jerseys as part of their 100 year celebration.

Armstrong's leadership skills extended beyond the ice as well. Following his playing career he returned to his junior team, the Toronto Marlboros, in order to become a coach and actually led that franchise to a pair of Memorial Cup Championships as well.

Of course our thoughts are with the Armstrong family, his loved ones and with the Leafs organization at this time, but I take great solace in the fact that Armstrong lived an incredible life filled with amazing accolades.

Rumor: Injury in practice may have knocked Nino Niederreiter out for the entire series.

Buffalo Sabres are “wide open for business.”
Subscibe to
Our NEWSLETTER
Receive the best articles of the web directly in your email