NHL News : Major officiating screw up in the NHL on Superbowl Sunday. 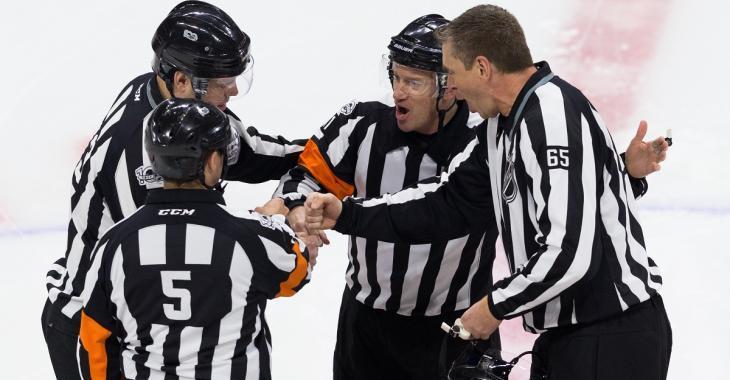 This has got to be one of the bigger officiating screw ups that I can remember in recent National Hockey League history. Thank god that this was a game early in the regular season, because if the stakes were any higher this would have provoked an even greater outrage.

The scene of the crime is Sunday afternoon when the Columbus Blue Jackets and the Carolina Hurricanes are facing off in what turned out to be a hotly contested game. In the final minutes of the game's second period, with the score tied at 3 - 3, the Hurricanes managed to secure their first lead of the game thanks to a goal from Vincent Trocheck. There was just one problem, the Hurricanes were offside on the play and the goal should have never counted.

Thankfully the NHL has instituted the coach's challenge and when officials make a mistake on the ice coaches in the league can challenge a call and get it reviewed. That was exactly what Blue Jackets head coach John Tortorella did and, as you can see from the short replay below, there's no doubt that the Canes were offside here.

For some as of yet to be explained reason however the officials on the ice rushed through the review and came back with a ruling that the call on the ice was going to stand. This not only resulted in the Hurricanes being awarded a goal, and a lead, that they had not earned, but it put the Blue Jackets in an even deeper hole by giving them a 2 minute penalty that they now had to kill off.

Well I will let the NHL explain it via their official statement on the matter:

Columbus requested a coach’s challenge for off-side prior to a goal at 18.45 of the second period. During the review, a miscommunication occurred between the Video Replay Booth in Columbus, the Linesmen and the Situation Room and play resumed before all replays could be reviewed to confirm the off-side. The challenge by Columbus should have resulted in the Carolina goal being disallowed. Subsequently, Columbus was assessed a delay of game penalty. After confirmation in the intermission that the play was off-side, the remaining 0:45 of the delay of game penalty issued was rescinded to begin the third period.

The Blue Jackets fan base is, understandably, up in arms over this and I have no doubt that Tortorella and the Blue Jackets are just as unhappy about it. The final score of this one by the way? A score of 6 -5 in favor of the Hurricanes, a situation where you can easily argue that this blown call potentially changed the outcome of a game.

Current and former NHL players react to the passing of beloved Coyotes employee Lou Monaco.
Subscibe to
Our NEWSLETTER
Receive the best articles of the web directly in your email