Who's your pick? Gotta be McJesus, right? 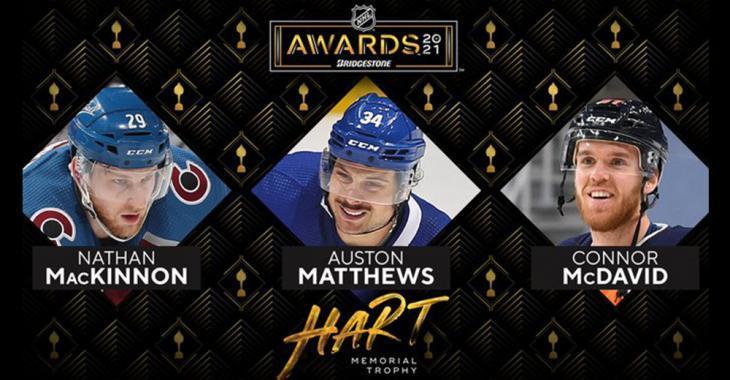 This just in, the NHL has announced that Colorado Avalanche forward Nathan MacKinnon, Toronto Maple Leafs forward Auston Matthews and Edmonton Oilers forward Connor McDavid have been named as the three finalists for the 2020-21 Hart Trophy as league MVP.

Hard to argue with these selections as these three players all absolutely dominated the regular season. I've got to say though, while MacKinnon might be my favourite all-around player in the game and while Matthews might be the best pure goal scorer in the game right now, that McDavid should win this award walking away. Need to be convinced? Simply take a quick look at the NHL's points leaders for this past season. McDavid had an eye popping 105 points in just 56 games... Oh, and the next closest player in the entire league was his linemate Leon Draisaitl with 84 points in 56 games. McDavid put up 39 more points than Matthews and 40 more points than MacKinnon. Not taking away anything from those guys' totals because they're obviously MVP worthy in a normal season, it's just that McDavid put together an absolute freak show of a campaign.

We haven't seen offensive dominance like this in the NHL since the heydays of Wayne Gretzky in the 1980s or Mario Lemieux in the 1990s. We witnessed a truly historic regular season from the Oilers' young captain. Frankly, I could see McDavid winning the Hart Trophy not only this year, but I honestly don't see a way for anyone to topple him for years if he keeps up this level of production. He's just on another level. Again, comparisons to Gretzky, Lemieux and even Bobby Orr aren't too far off. Like those other legends McDavid clearly stands apart from his peers and, to me, he's the obvious and only correct choice as league MVP.

Again though, I don't want my endorsement of McDavid to take away from the accomplishments of both MacKinnon and Matthews. There's a reason why they're on the ballot despite being outpaced by players like Draisaitl, Brad Marchand, Mitch Marner, Mikko Rantanen and Patrick Kane. As MacKinnon and Matthews go, so to do the Avs and Leafs. They're legit superstar players who make everyone around them better and both have the skill to challenge McDavid as the game's best player for years to come.

Failed trade by Maple Leafs gets fans going on social media!
Subscibe to
Our NEWSLETTER
Receive the best articles of the web directly in your email