Such a tragic story. He was just 59 years old. 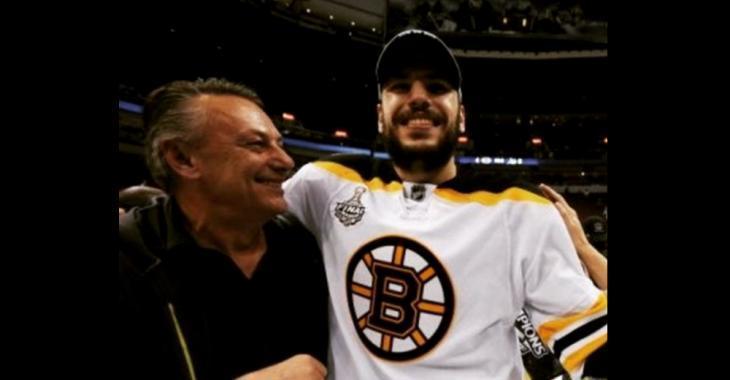 Calgary Flames forward Milan Lucic recently sat down with Sportsnet reporter Eric Francis and opened up about the tragic passing of his father Dobro Lucic. For those who don't know, Dobro ended his own life at the age of just 59 years old in April, 2015. In the six years that have passed since the younger Lucic now admits that his father's death sent him in a "downward spiral" that he's just now beginning to get himself out of.

“There’s always the question, ‘why.’”

Dobro immigrated to Canada in 1984 from his native Serbia and settled in East Vancouver's working class Killarney neighbourhood. In just a few short years he met a woman, Milan's mother Snezana, married her and had three children. He was a working class man and he raised a proud working class family.

“He was honest with us," recalls Milan. "He was hard on us. A lot of the reasons I am the way I am is because of him. Every morning we had to make our beds, brush our teeth, do our hair. We were in trouble if we didn’t do that or put our plate away. My wife to this day is still in awe that me and my brothers never leave the toilet seat up. We were in a family of five and my mom was the only female in the house. My dad was strict on us like that. He harped on us on every little thing and I think that was the military side of him.”

When Dobro unexpectedly took his own life at just 59 years old, it was a shock to everyone who knew him. He was an exemplary Father, Husband and Grandfather. He raised three successful children, one of whom managed to hoist the Stanley Cup in his own hometown. That's... that's just about as good as it gets in life.

“You can go down the rabbit hole of trying to figure out why and blame this and that, but you’ll never get an answer," says Milan. "You kind of have to just grieve and deal with it. What I’ve learned is the important mental side of things by helping yourself with it, by not being afraid to talk about it and saying what’s on your mind. Hopefully that can help other people with it.”

Healing the "mental side of things" was tough for Milan and he admits that it's still a struggle for him some days. But he knows that his father is looking down on him and smiling now. “He’d be the first guy to hug me and tell me how proud he is of me." Amen, brother. Stay strong Looch.

For the full story from Eric Francis, click below:

From 135th overall to Calder Trophy winner!
Subscibe to
Our NEWSLETTER
Receive the best articles of the web directly in your email