NHL News : Lightning ready to pack the building with 18,000 allowed for Game 2

Let's go! This is how it should be! 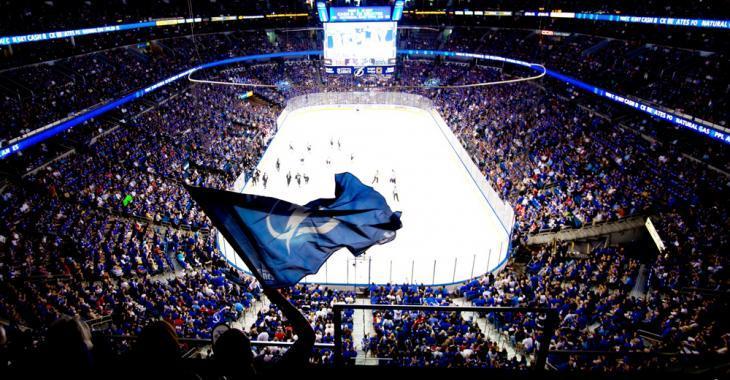 According to a report from Tampa Bay Lightning insider Joe Smith of The Athletic, the team has been approved to have 18,600 fans in attendance at Amalie Arena for Game 2 of the Stanley Cup Final this evening against the Montreal Canadiens.

Capacity at the arena is officially 19,200 making tonight's attendance 96% capacity. Meanwhile, the Canadiens are hoping that federal and provincial authorities increase their capacity at the Bell Centre from 10% to 50% (10,500 individuals).

Currently there only 2,500 individuals allowed inside Bell Centre for Habs homes games. Meanwhile though, tens of thousands of fans have been gathering outside of the arena for each and every home and away game. To me, it seems silly to have 2,500 fans socially distanced in the arena but 10 times that amount outside with no masks on and no social distancing. Like... what are we doing here? I'm no infectious disease expert, but I know a mixed message when I see one. For what it's worth there have been exactly zero cases of COVID-19 resulting from an event at the Bell Centre since the team re-introduced fans for their first round series against the Toronto Maple Leafs. I'm sure that that's not the case for fans gathering outside the building, but it's also worth noting that Quebec seems to have gotten their COVID-19 cases numbers under control over the Spring/Summer months.

More than that though, frankly we're being robbed as hockey fans if we can't see a full house for Games 3 and 4 of the Stanley Cup Final. Imagine a packed Bell Centre with the Stanley Cup in the building and a chance for the Habs to claim their 25th championship in franchise history. That's about as good as it gets and it would create an absolutely ELECTRIC atmosphere in La Belle Province. Here's hoping that common sense can prevail and the Habs can at least get to 50% capacity for Games 3 and 4.

For Game 1, the Lightning were allowed 16,300 fans at Amalie Arena which is 85% capacity, up from 47% capacity (9,000) in round 1 against the Florida Panthers, 71% capacity (13,500) in round 2 against the Carolina Hurricanes and 78% capacity (14,800) in round 4 against the New York Islanders. Again, here's hoping that both buildings are at full capacity before this Stanley Cup Final is over and done.

Report: The Jack Eichel saga is shifting with potential trade coming soon!
Subscibe to
Our NEWSLETTER
Receive the best articles of the web directly in your email