NHL News : Lightning party through the night and are still going strong today!

No rest when you go back to back! 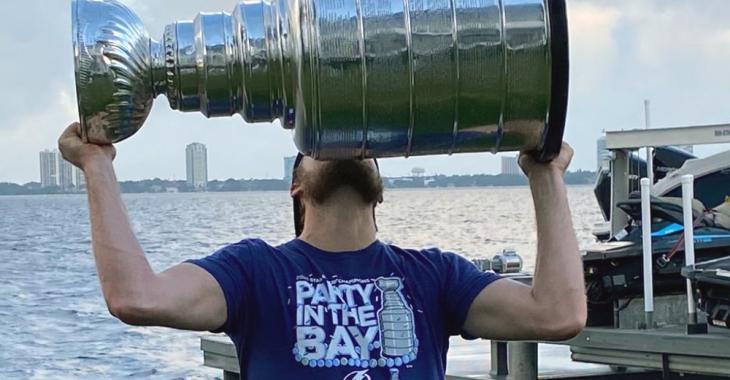 In case you somehow, someway missed it last night the Tampa Bay Lightning bested the Montreal Canadiens 1-0 in Game 5 of the Stanley Cup Final to clinch back to back Stanley Cups. Goaltender Andrei Vasilevsky was named Conn Smythe Trophy winner as playoff MVP and rookie Ross Colton scored the game's only goal to seal a 1-0 victory.

Once the final buzzer rang Tampa's Amalie Arena was an absolute gong show.

After the Conn Smythe and the Stanley Cup were awarded though, that's when the real fun began. Sure, the on-ice celebrations are also a treat to watch and it's cool to see all the players hugging, mugging and effectively turning into little boys when they finally get to touch the Cup, but the real celebration happens behind closed doors.

Check out the booze fuelled celebration that transpired in the Lightning's locker room:

From there there were drunken, shirtless Zoom press conferences, dozens upon dozens of F-bomb's and "Let's go!!!!"'s tossed out and a private jet with a direct flight back home to Tampa. Where, evidently the partying is still going on. Lightning captain Steven Stamkos tweeted this message out this morning stating that there's no need for sleep when you go back to back.

Live it up, boys! It's rare for a team to go back to back and you just entered yourself into the history books with the likes of legendary teams like the Pittsburgh Penguins, Detroit Red Wings, Edmonton Oilers, Canadiens, Philadelphia Flyers and Toronto Maple Leafs. You've earned the right to party like rock stars!

Frankly, I can't wait to see what kind of celebrations the Bolts have on tap for a Stanley Cup parade. You may recall that after last year's victory the team went completely off the rails during their Bay boat parade. Despite some COVID-19 restrictions the team engaged with fans and pretty much threw caution to the wind. With those restrictions now almost entirely gone in the state of Florida, the Bolts have an absolute green light to party their faces off this offseason. Let's go, boys! You've earned it!