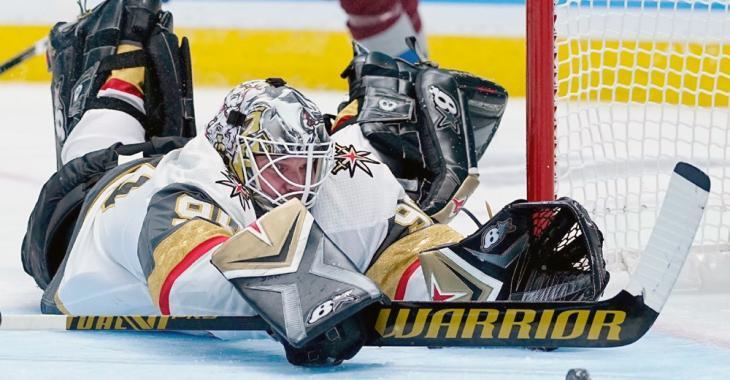 This just in, Vegas Golden Knights goaltender Robin Lehner has been pulled from his team's lineup just minutes before Game 2 against the Colorado Avalanche.

Lehner, of course, was absolutely LIT UP by the Avs in Game 1 of the series. It was always expected that Marc-Andre Fleury would start tonight's game, but Lehner was expected to back him up on the bench.

In fairness, head coach Peter DeBoer threw Lehner to the wolves in Game 1. He hadn't played a game in weeks and was forced to go up against arguably the most high flying, offensive team in the NHL in the Avs. But, Lehner is a professional and he stood in there and took the arrows slung his way. He allowed seven goals and you just KNEW that Fleury wasn't going to come into the game to stop the bleeding. Lehner's job was to give Fleury the night off win or lose and he followed through.

But tonight's news makes you wonder if there's something else at play.

Lehner put together an impressive season with the Golden Knights this year, even if he took a back seat to Fleury most nights. He started just 19 games to Fleury's 36 games, but he posted an impressive 2.29 goals against average and .913 save percentage. Decent numbers by any standard, but the issue is that Fleury put up an eye boggling 1.98 goals against average and .928 save percentage, good enough for a Vezina Trophy nomination.

Lehner has long been an advocate for mental health and he has built a reputation as being one of the most likeable teammates regardless of where he's played. I would very much doubt that his removal from tonight's lineup has anything to do with him sulking about riding the pine, it's much more likely that he has some sort of injury or illness that hasn't been disclosed to the media.

In any case, Fleury is certainly not a bad option for the Golden Knights moving forward. Not only did he have a fantastic regular season, but he was absolutely electric in Vegas' first round series against the Minnesota Wild posting a 1.71 goals against average and .931 save percentage.

Update: Kraken borrow from the Leafs for another coach hiring
Subscibe to
Our NEWSLETTER
Receive the best articles of the web directly in your email