Lots of action around the Leafs as they prepare to take on the Habs tomorrow night. 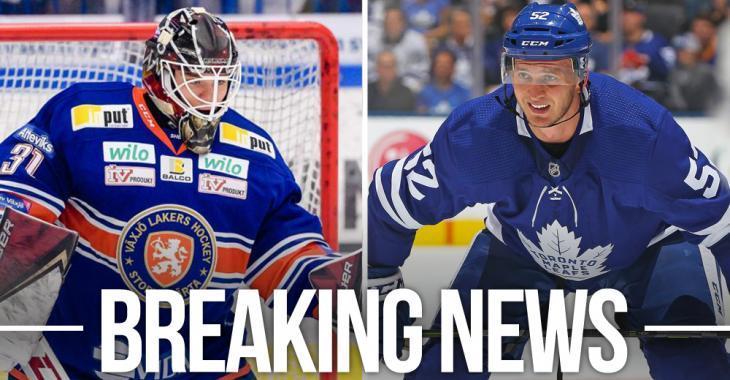 This just in, the Toronto Maple Leafs have signed free agent goaltender Erik Källgren to a two year contract worth $750,000 per season.

The 24 year old Swedish goalie appeared in 21 regular season games for Växjö HC this season where he posted a 12-9-0 record with a 2.37 goals-against average and a .911 save percentage. In 10 postseason games this season, the 6'2", 185 pound netminder posted a 7-3-0 record with a .937 save percentage, capturing the Swedish Hockey League Championship. In short, the kid is a stud and has real NHL potential.

Incidentally, the Leafs have made some other roster moves in advance of tomorrow's opening game of their Stanley Cup Playoff series against the Montreal Canadiens. Yesterday, the Leafs shipped defenceman Mac Hollowell and forward Scott Sabourin to the AHL's Toronto Marlies after it was reported that veteran Zach Bogosian will return to action for Game 1.

Today, however the Leafs recalled defenceman Martin Marincin from the Marlies, leading many fans to wonder if Bogosian's status for Game 1 is still up in the air.

However things shake down, you can't say that the Leafs' management group isn't working hard behind the scenes to get their roster in order for a healthy post-season run.

Latest (and encouraging) update in Jack Eichel trade situation!
Subscibe to
Our NEWSLETTER
Receive the best articles of the web directly in your email