NHL News : Leafs make a number of roster moves as they prepare for the Stanley Cup Playoffs

It's the most wonderful time of the year! 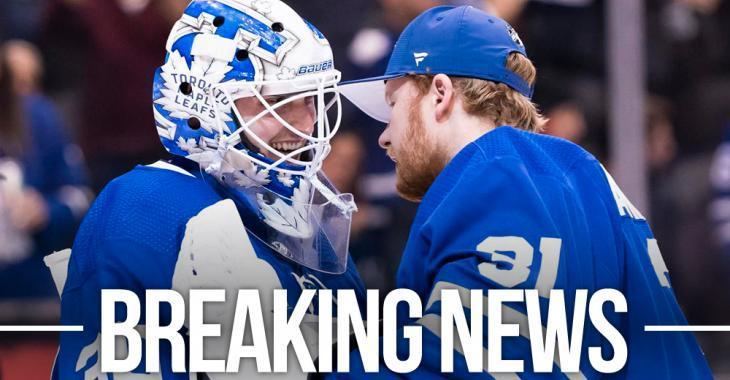 This just in, the Toronto Maple Leafs have made a number of roster moves as they prepare for the Stanley Cup Playoffs this upcoming weekend. Oh... and just by coincidence it looks like goaltender Frederik Andersen is ready to return to action.

The Leafs have assigned veteran goaltender Michael Hutchinson to the AHL's Toronto Marlies, along with defenceman Timothy Liljegren and forward Stefan Noesen. Additionally defenceman Mac Hollowell has been assigned to the team's taxi squad.

With Hutchinson now officially on the Marlies, expect the Leafs to activate Andersen from the injury reserve at some point this week. Of course Jack Campbell and David Rittich are already on the team's roster. The Leafs have just two regular season games left before the playoffs, so don't be surprised if Andersen gets some action in both of those games. The real question though is who will be in net for Game 1 of the playoffs? Campbell or Andersen?