Uh oh… imagine if they lose him for a lengthy period… 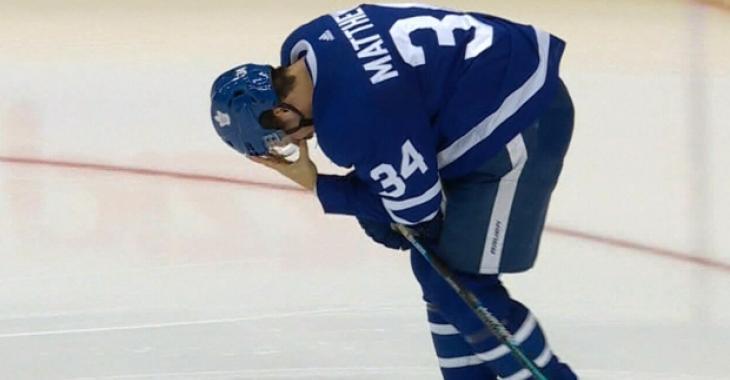 If you haven’t heard about Auston Matthews’ recent wrist injury, you would have never guessed he had one by watching last night’s game in which the Toronto Maple Leafs fell 4-3 to the Winnipeg Jets. Matthews ended the night with two goals. However, insider Jonas Siegel of The Athletic noticed some signs of pain in the star forward and wonders if the Leafs should be playing an injured Matthews.

First, he noticed this in the loss: “The Leafs were down two with just over two minutes to go. Their net was empty. The puck came to Auston Matthews around the right faceoff circle, prime shooting territory in other words. Then arguably the greatest shooter on the planet… passed.”

As I said, Matthews ended the night with two goals, which is extraordinary especially while playing injured. Matthews noted after the game how he barely feels the pain while playing.

“Once you get out there it dwindles away,” the 23-year-old said.

And while head coach Sheldon Keefe maintains that Matthews’ injury isn’t the kind “that’s gonna get worse”, he did admit that he was affected by it.

“Well, clearly it affects his shot,” Keefe acknowledged on Monday afternoon. “We’ve moved him around on the power play as a result of that. He’s not comfortable in his shooting. But I think he’s shown that he’s very good in a lot of other areas. It doesn’t seem to be affecting his ability to handle the puck, pass the puck.”

That’s why Siegel asks this tough question: “But will it get better if Matthews continues to play through it? The answer, at least to this point, seems to be no.”

The Leafs are expected to take part in the postseason and go all in for the championship, and so, wouldn’t they want to have their best player in the best shape possible?

Toronto is getting a lot of grief and it should. Rest Matthews. They can still win without him as “the Leafs have been getting contributions from up and down the lineup of late.”

Have him fully healthy when it matters most.

At least on Wednesday, Matthews missed practice, likely a maintenance for his wrist.

A look at the roster the Seattle Kraken could have drafted.
Subscibe to
Our NEWSLETTER
Receive the best articles of the web directly in your email