He was a game-time decision after missing the morning skate and almost all of Game 6... 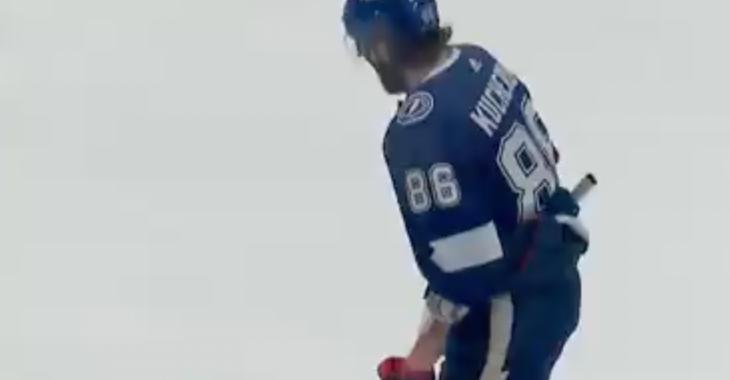 Nikita Kucherov took part in the Tampa Bay Lightning’s pregame warmups ahead of the do-or-die showdown against the New York Islanders, and minutes prior to puck drop, it was announced that he would play.

Fans didn’t know until the last moment since head coach Jon Cooper had announced this morning after the skate, in which Kucherov was absent, that he couldn’t confirm if his top forward would suit up tonight.

Kucherov played a single shift in Game 7 in New York as he was taken out with what appeared to be a shoulder injury. The team calls it for now an undisclosed injury sustained early in the first period of Game 6. He left after his first shift, 2:22 into the first period as he appeared to jam his right arm or shoulder while hitting Islanders center Mathew Barzal. He struggled to finish the shift and went to the dressing room with a Lightning trainer. He was however also also cross-checked from behind by New York defenseman Scott Mayfield earlier in his only shift, which lasted 46 seconds. No penalty was called was called on the play.

The Amalie Arena crowd actually boos Mayfield every time he touches the puck.

Footage of him gingerly skating during TV timeouts quickly had fans wondering on social media.

What is reassuring is that Kucherov clocked more than six minutes of ice time in the first period, but he however did not record a single shot. No shot attempt. The score is tied at 0 after 20 minutes. The Bolts recorded 14 shots on goal, while the Islanders managed just five.