NHL News : Kraken’s lineup gets significant changes less than an hour before opener! 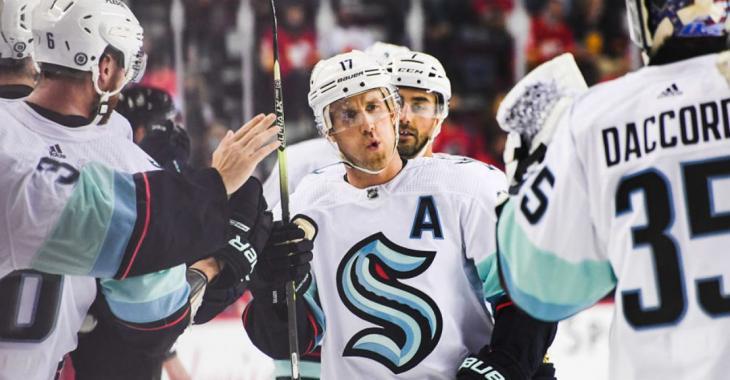 It didn't look like the start the Seattle Kraken was hoping for… Earlier on Tuesday, Jared McCann. Jamie Oleksiak, Joonas Donskoi and Calle Jarnkrok remained in NHL COVID-19 protocol as the Kraken are set to play the Golden Knights in its first game in NHL history.

Head coach Dave Hakstol had in fact pointed out hours prior to the season opener that his lineup was still a work in progress.

“It’s up to us to set the lineup as soon as we can but also do our due diligence to make sure we have everybody available that could possibly be available and then set that lineup and get ready to go tonight.”

Forward Marcus Johansson was cleared from COVID-19 protocol before the Kraken traveled to Las Vegas on Monday, and it remained to be seen who else will complete the lineup for Seattle in their historic start.

But then, there was a significant shift in the story: it was announced about an hour prior to warmup that Donskoi and McCann and Oleksiak cleared COVID-19 protocol on Tuesday and have arrived in Las Vegas ahead of the season opener against the Golden Knights. Multiple sources confirmed the players are at T-Mobile Arena and expected to play, leaving only Jarnkrok still in COVID protocol and unavailable.

Who knows, the team might benefit from more beginners’ luck in Vegas and get a win!

Gaudette responds to accusation he caused the COVID outbreak in Canucks' locker room.