Following in the Golden Knights' footsteps? 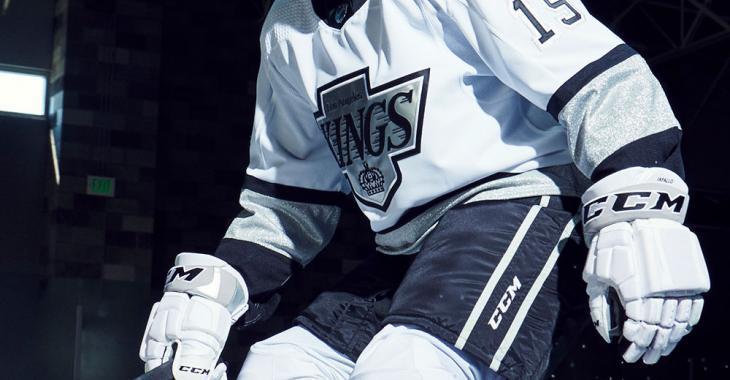 The Los Angeles Kings have unveiled their new third jerseys for the 2021-22 season featuring the classic "Gretzky Era" logo, white gloves and... and I'm not sure how I feel about this... a reflective chrome helmet.

A more in depth look:

Personally, I'm not much of a fan of white gloves but I absolutely love the jerseys. The helmets... well... it's just not my thing, I guess.

But, before I get into what I don't like about this uniform, let's focus on the positives.

Firstly, I absolutely love the logo. Maybe it's still nostalgia speaking, but personally this is my favorite Kings logo. I'm a big fan of the Kings' 90's "Gretzky Era" look and this absolutely harkens back to that era. Fun fact though, the crown displayed on the logo is actually a Queen's crown, not a King's crown.

I also really like the silver piping around the numbering and on the arms and bottom of the jersey. Very cool and unique.

Now... speaking of unique... can we just drop the silly reflective helmets already?

The Vegas Golden Knights brought in the golden helmets last season and I actually thought it was a bit of a joke at first. The team has elected to keep them though and, to me, I just can't help but think that they look silly and gimmicky. The off-black, charcoalish color that the team used initially looked really sharp to me and I didn't feel like they needed a change. But here we are...

Now the Kings are hopping on the bandwagon and, while I reserve my judgement until I see these live on television, at first glance they look just as gimmicky as Vegas' to me. Oh... and it's clearly a direct take off on the Golden Knights, one of the Kings' biggest rivals. Throw in the white gloves, just as Vegas wears, and it's pretty clear that the Kings are trying to capitalize on some of the new fans that the Golden Knights made with their unique look. Again, to me though... it just looks like a bit of a cheap knockoff. Which is definitely not the type of thing you should be striving for when you're looking at your rivals. Thoughts, Kings fans?

The Sabres trade Sam Reinhart right after 1st round of NHL Draft!
Subscibe to
Our NEWSLETTER
Receive the best articles of the web directly in your email