NHL News : Keefe shuffles his lines, makes one change to his lineup. 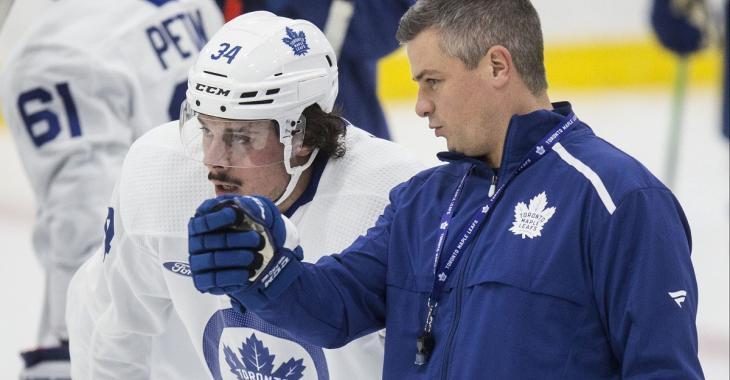 The Toronto Maple Leafs are set to square off against the Winnipeg Jets on Saturday evening and head coach Sheldon Keefe appeared to mix things up a little on Saturday morning in anticipation of that match up.

First, we'll get to the actual change to the line up with Keefe revealing that he was making one player adjustment today. Stepping back into the lineup will be 27 year old centerman Travis Boyd who has had 18 appearances for the Leafs thus far on the season. Over his 18 games he has put up solid numbers with 3 goals and 5 assists for a combined 8 points and a plus minus rating of +2 on the season, with just 2 penalty minutes to his name no less.

Unfortunately in the world of sports one man's good news when it comes to being injected into the lineup is another man's bad news, and this time it will be veteran winger Kenny Agostino who will be sidelined after making just a single appearance on the season thus far for the Maple Leafs.

Sheldon Keefe also appeared to shuffle his lines a little, or at least indicated he would be doing so, with forward Zach Hyman expected to play alongside both Auston MAtthews and Mitch Marner on Saturday. Although Keefe himself did not confirm this, Leafs beat reporter Lance Hornby has speculated that this will result in forwards Joe Thornton, John Tavares and William Nylander being grouped together to form the team's second line against the Jets.

There were also questions about Scott Sabourin, who was called up from the American Hockey League and was added to the Leafs taxi squad, and whether or not he would be in the lineup on Saturday. So far it looks as though Sabourin will not play against the Jets, however Sheldon Keefe did leave open the possibility of utilizing him against his former team, the Ottawa Senators, who the Leafs will face off against on Sunday in the latest chapter of the Battle of Ontario.

Last but certainly not least, there has been talk of potentially resting Auston Matthews as a result of his wrist injury. Keefe however indicated that this will not be the case, believing that the injury is minor enough that it will simply heal with time, even with Matthews playing.