NHL News : Keefe makes a call on Matthews and his injured wrist for Saturday against the Oilers

Probably not the update Leafs fans wanted to hear. 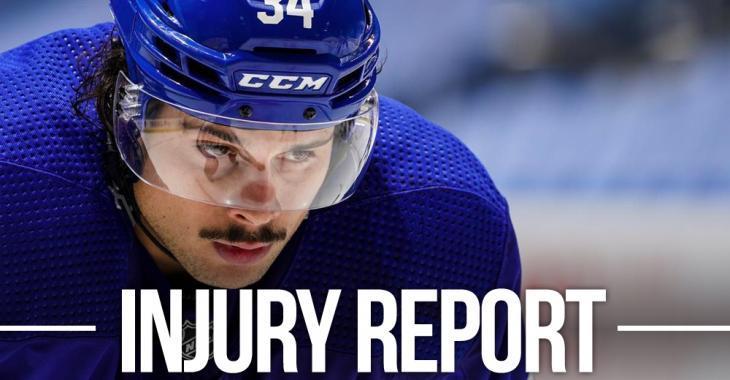 Toronto Maple Leafs fans collectively gasped when it was reported that superstar Auston Matthews has been dealing with an injury, but TSN's Darren Dreger reports that the NHL's leading scorer probably won't miss any time due to the ailment.

On this evening's Insider Trading segment on TSN, Dreger issued an injury update on Matthews that's both positive and negative.

"Well the good news is that it's not structural, it's more soreness. It's believed to be a minor issue. It's something that he's been dealing with and has recently aggravated it. You could see that the Toronto Maple Leafs made adjustments to allow Auston Matthews to avoid the one-timer in the series against the Calgary Flames. They made adjustments to their powerplay structure. I don't think that we should sound alarm bells if he's not on the ice (for practice) on Friday."

That... that doesn't sound good. If the Leafs are having to adjust their game plan because of Matthews' sore wrist, that's just a recipe for disaster. Then again, forcing the guy into one-timer positions and putting additional strain on his injury is a recipe for disaster as well. I guess you can only have so much concern though when the guy is leading the NHL in goal scoring despite having an injured wrist.

"The expectation is that he will be able to play through it and will play against the Edmonton Oilers on Saturday."

While Matthews did not skate with the team at practice today, Leafs head coach Sheldon Keefe wouldn't tip his hand either way on his star players' availability for tomorrow night's game against the Edmonton Oilers.

When asked specifically if Matthews will play, Keefe would only say that he "hasn't been ruled out."