But... when will the Leafs captain be back in the lineup? 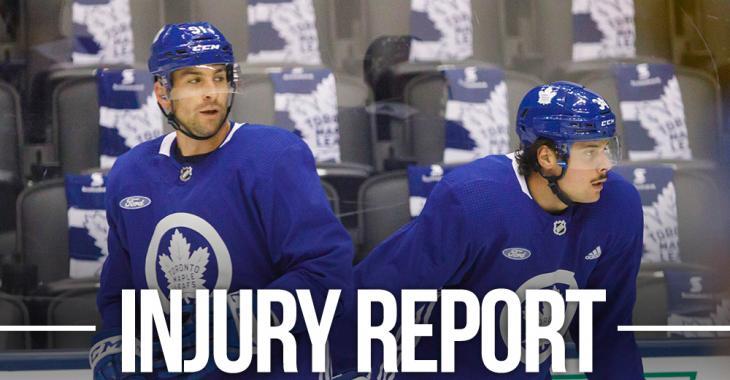 According to a report from TSN hockey insider Kristen Shilton, Toronto Maple Leafs captain John Tavares has re-joined the team at their practice facility. While he's not skating or training with the team, Shilton reports that Tavares is present to get "re-acclimated with the group."

Officially, Tavares is still out of the lineup indefinitely as he deals both with a knee injury and with concussion symptoms as a result of a hit from Montreal Canadiens defenceman Ben Chiarot and the subsequent horrific collision with Habs forward Corey Perry during Game 1 of the teams' best of seven opening round playoff series.

Tavares and his wife Aryne Tavares issued a statement earlier today announcing that they'll be personally donating up to $50,000 to benefit Canadian charities during the Leafs' Stanley Cup Playoffs run.

An incredibly generous and noble gesture and one that only goes to prove that a the Tavares' are as selfless as people report them to be. Here's a guy who has had his teeth kicked in and has every reason to feel sorry for himself, but instead of doing that he's stepping up to do some good for his community. That's real leadership.

As for Tavares' health, it's not expected that he'll make a return this post-season, but you never know what can happen. Should the Leafs make it all the way to the Stanley Cup Final, the calendar will read July. That might be too early for Tavares to recover given the nature of knee injuries, but one would hope that his concussion symptoms have subsided by then. If he's able to rehab aggressively over the next six weeks, it's not out of the realm of possibility to see captain JT come riding in like a knight in shining armour come the final. Of course, the Leafs have to get there for it to matter at all. While the team looks to have a handle on the Montreal Canadiens, the Winnipeg Jets will be no easy out. The Jets' top players are firing on all cylinders and goaltender Connor Hellebuyck looks borderline unbeatable. If The Leafs are going to make a push and get their captain back this post-season, they'll have some work to do first.