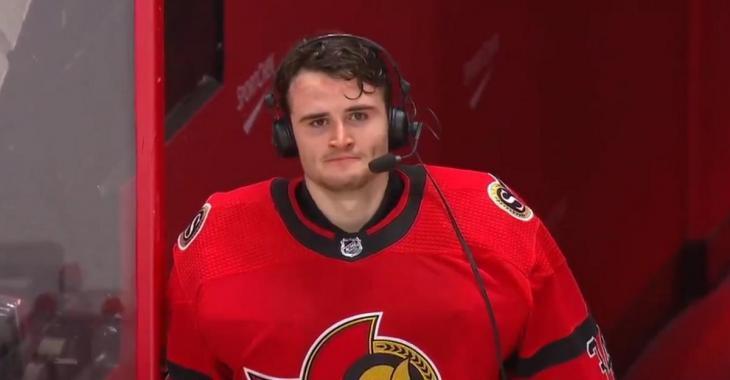 Fans of the National Hockey League were in for a special treat on Sunday night if they tuned into the Battle of Ontario between the Ottawa Senators and Toronto Maple Leafs, as the game produced one of the most emotional moments of the season.

It was a pretty crazy story by the time all was said and done, goaltender Joey Daccord had picked up his first win in the NHL under rather unusual circumstances. Daccord, who wasn't even supposed to start on Sunday night, was suddenly thrust into a game against the top team in his division when veteran goaltender Matt Murray suffered some type of injury or ailment during the game's pre game warmups.

Rather than wilt under the pressure however the young netminder had himself a pretty good game and even admitted after the fact that he was determined to pick up the victory from the very moment that it was announced he would be going in instead of Murray.

It must have been an incredibly special moment for the young man as not only did it represent his first NHL win, but the win came against the team that his father is currently working for. Brian Daccord is currently employed as a goaltending consultant by the Toronto Maple Leafs, but I'm sure he was extremely happy to see his son pick up the win on Sunday night in spite of the fact that it meant a loss for his team.

Following the win the younger Daccord was unable to contain his emotions. He was interviewed during the post game and it seemed almost as if the weight of everything that had just happened began to finally register in his mind at that very moment, and he was suddenly overcome with emotion while discussing how much the win meant to him. It was a long and hard journey for Daccord to even reach the NHL and finally picking up a win in the NHL, against a pretty good Maple Leafs team no less, likely felt like a validation of his years of hard work.

It made for a truly must watch moment, and you can see it right here below.