Things are going to get ugly! 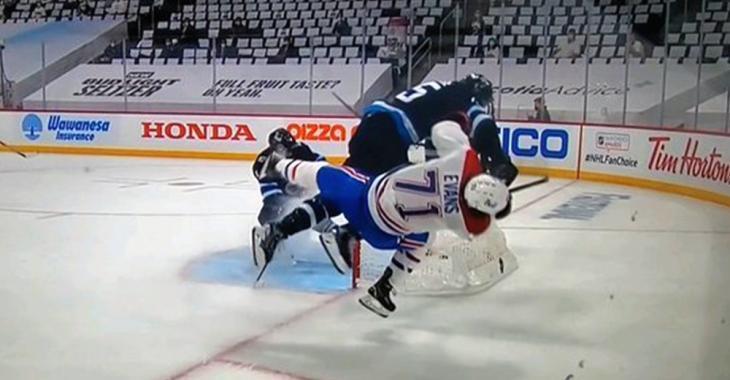 UPDATE: Habs blueliner Joel Edmundson has officially put a target on Scheifele's back saying that he's going to "make life miserable" for Scheifele later in the series.

Late in the third period of Game 1 of the second round series between the Winnipeg Jets and Montreal Canadiens and we have yet another gut-wrenching moment in the Stanley Cup Playoffs.

Habs forward Jake Evans effectively iced the game late in the third period with an empty netter, but before he could celebrate the goal he got absolutely TRUCKED by Jets forward Mark Scheifele.

Here's another look at the hit:

Evans' face absolutely smashes the ice, but it looks like he may have even been out cold before he hit the ice. He has been stretchered off the ice and was moving his hands as he was taken off the ice. More to come on his status when information becomes available.

During live play I literally gasped out loud at the hit and called for a 5 minute major for charging. I mean, Scheifele comes barrelling in on Evans and just separates him from his senses. But, on second viewing I'm not so sure that this is a textbook charging call. Sure, Scheifele is moving at a high rate of speed, but he clearly glides and doesn't stride into the hit. Officially Scheifele received a five minute major for the hit which didn't matter much given the score and the late stage of the game. It'll be interesting to see what is waiting for him from NHL Player Safety in the morning.

I think we can safely assume that Scheifele will be sitting out some time due to this poor decision. I'd suspect a one or two game suspension given that he has no prior history and that he did't appear to lift his elbow or his stick to catch Evans. This was clearly a situation of a frustrated player catching an opponent in a vulnerable position, a position which should enable you to stop up. In Scheifele's case though he elected to play right through Evans, again likely due to frustration on his own behalf. And well... if he was frustrated before just imagine the frustration he'll feel while watching his team from the press box.

Former Blackhawk speaks out publicly about sexual assault allegations in Chicago, calls for “jail.”
Subscibe to
Our NEWSLETTER
Receive the best articles of the web directly in your email