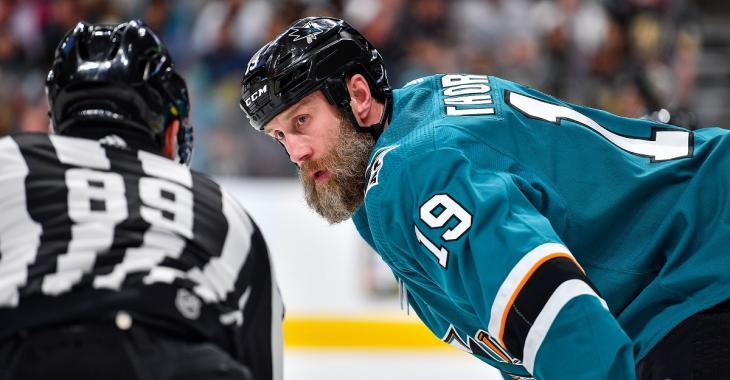 For many the Joe Thornton experiment with the Toronto Maple Leafs seemed like the last chapter of an incredibly storied career in the National Hockey League, but for the man himself it may not be all that simple. Although it would appear now that there is no chance of Thornton coming back to the Maple Leafs for another season, the Leafs are already over the cap in the offseason and would likely struggle to find room against the cap to offer Thornton a new deal, the veteran forward does appear to be hoping he will get an offer from another team in the league.

In a recent article published for the Toronto Sun, controversial Toronto columnist Steve Simmons revealed that Thornton is currently skating in Europe and furthermore that he is hoping he will be able to play come next season. Simmons calls him an "optimist" for doing so, and frankly that may be a fair characterization at this point given that we are now in the very late stages of Thornton's career as a professional athlete.

Thornton didn't have a particularly bad season with the Maple Leafs, he recorded 5 goals and 15 assists for a combined 20 points over his 44 games played in the regular season, but he was noticeably slower than many of his younger counterparts on the ice. Combine that with the fact that his skills have always been on the offensive side of the game, making him less suited for a bottom 6 type of role, and you might be hard pressed to find a spot for Jumbo Joe in the NHL at 42 years old.

Thornton of course brings a ton of intangible elements to the table as well and it is possible that those could be enough to secure him another NHL deal. His unmatched experience at the NHL level among active players as well as his ability to take draws in the faceoff circle are great assets for a team to have, but the problem at this stage is that Thornton is looking to play for a Stanley Cup contender.

Is there a contender out there with a roster spot that it can afford to give up for Thornton? That remains to be seen. If Thornton doesn't get a deal prior to the start of the season though, I won't be shocked if he ends up being signed mid season by a team that loses a player at the forward position due to injury or other unforeseen circumstances.

Tony DeAngelo has found a new NHL team!
Subscibe to
Our NEWSLETTER
Receive the best articles of the web directly in your email