The former Blackhawks employee makes his first public statement since the story broke. 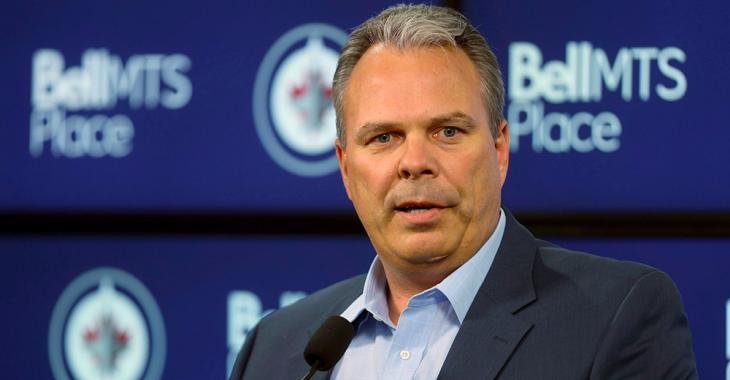 Winnipeg Jets GM Kevin Cheveldayoff, who is also scheduled to meet with the media today also released a statement that more or less echoed Bowman's own statement.

Check it out courtesy of Jets insider Murat Ates:

Cheveldayoff was employed by the Blackhawks at the time of the allegations.

Meanwhile, former Blackhawks player Brent Sopel, in speaking with TSN's Rick Westhead said that the Blackhawks locker room was abuzz for days with discussion about Aldrich during the 2010 Western Conference finals, after then-skills coach Paul Vincent asked Blackhawks management during a meeting in San Jose to report Aldrich’s alleged sexual assault of two players that season to police.

“…I’d say pretty much every player said, ‘Holy s--t’ and was shocked by it,” Sopel said. “We were all in the same dressing room. It was something that was discussed for at least two or three days. [Then head coach Joel] Quenneville was in the same office as [Aldrich]. We heard about it.”

Quenneville, now head coach of the Florida Panthers, issued a statement that essentially denied any being aware of the allegation.

“The allegations in this lawsuit are clearly serious," Quenneville wrote. "I first learned of these allegations through the media earlier this summer. I have contacted the Blackhawks organization to let them know I will support and participate in the independent review. Out of respect for all those involved, I won’t comment further while this matter is before the courts.”

There's just one problem with that according to Westhead... how did Quenneville NOT know about the allegations? After all, Aldrich was a valued member of Quenneville's own coaching staff and he was fired by the team just days after winning a Stanley Cup. You're telling me that Quenneville wasn't given reasons for why a member of his own staff was unceremoniously fired?

I'm calling BS on that. Quenneville HAD to have known exactly what was going on.

As for Sopel, he claims that he mistakenly assumed that the Blackhawks had alerted authorities and dealt with the matter properly back in 2010 and was shocked to learn only in the past few months that Aldrich was never brought to justice.

“I understand that doing the right thing is hard,” said Sopel to Westhead.

“A lot of those guys who were on that 2009-10 team are still with the Blackhawks getting paid and they're either still playing, or in broadcasting or coaching, management or scouting or being an ambassador for the team. That’s why they are not saying anything. Guys want to protect their jobs. But they should still be doing the right thing and telling the truth publicly about what happened.”

The team allegedly dismissed Aldrich in the 2010 offseason, granting him a job reference which he used to get a similar coaching role in the NCAAA. Alrdrich would be arrested and convicted of sexually assaulting a member of that team in 2013.

“That’s the most disgusting thing I’ve ever heard in my life,” Sopel said. “They gave him a job reference after what he did to their players. Everybody assumed the Hawks would do the right thing but clearly, they didn’t.”

Full protected list for every NHL team.
Subscibe to
Our NEWSLETTER
Receive the best articles of the web directly in your email