These fans get mad. 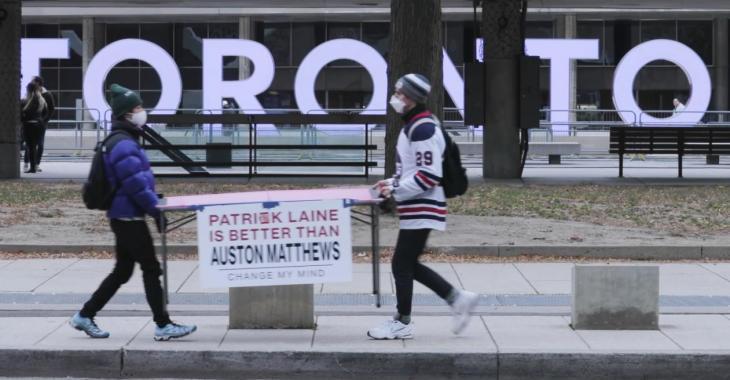 It is, to be quite honest, a rather boring time to be a hockey fan right now with yet another season on hold due in large part to the ongoing pandemic, and it is perhaps due to that boredom that this Winnipeg Jets fan did what he did.

That fan is none other than TSN's Jesse Pollock and what he did was take to the streets of Toronto in what can only be described as a blatant attempt to provoke a reaction out of the fan of the Toronto Maple Leafs. Pollock set up a station at various points throughout the city where he brandished a sign that claimed that Winnipeg Jets forward Patrik Laine was a better play than Toronto Maple Leafs forward Auston Matthews.

Now there's no question that both men are great players, but when you look at their career numbers to this point you would be hard pressed to make a genuine argument that Laine has been the better player. Pollock of course knows this and was unquestionably hamming it up in front of the camera in order to provoke the best possible reaction out of fans in Toronto.

To his credit he got a couple of fans to take the bait, and one in fact seemed to take it a little too well. There were of course a number of fans who got in on the debate just because they felt they had a strong case, but one long haired man in the video got REALLY riled up by the topic being discussed. Not as angry as another Toronto pedestrian who went a little too far and decided to throw food at Pollock rather than debate the issue. The good news here is that the food seemed to be some leftover McDonald's fries, so Pollock didn't suffer any injuries except perhaps a little bruise to his pride and it's clear that the last thing that angry fan needs is more salt in his diet.

There was another moment in the video that can only be described as strange, and that is when one Toronto man in a brightly colored jacket takes the mic and randomly begins roasting his own wife. Check it out: