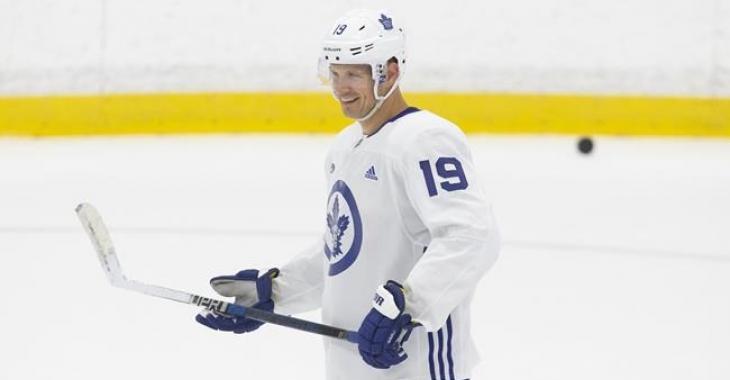 The Toronto Maple Leafs will have to play with its roster all season long to respect the flattened salary cap, however, the move that took place in practice on Friday made us wonder if veteran forward Jason Spezza has the same rocky relationship with head coach Sheldon Keefe than he did with Mike Babcock before he was fired.

Spezza might have sat in the press box as a healthy scratch 10 days ago, he was more than back on the ice on Thursday night, recording a hat trick in his team’s 7-3 victory over the poor Vancouver Canucks.

However on Friday, he practiced with the taxi squad which had a lot of fans wondering : WHY??

We all remember how Spezza struggled on Babcock back in the day. It seemed to all start when he was scratched on opening night in 2019 by Babcock after joining his hometown team on a league-minimum contract. When Babcock was fired in Toronto, Spezza had explained the struggles between he and the head coach, commenting on their relationship and his role to Babcock’s eyes.

“If you ask my wife how I felt about it, she gets the truth [chuckles]. If you ask my teammates, you try to make it seem as little as possible. That’s the reality of the situation, and that’s why I’m obligated to do that — because I want to be in a positive dressing room,” Spezza had explained then.

We hope the same thing isn’t taking place with Keefe, though rest assured, Spezza will be in the Leafs’ lineup Saturday for the game against the Canucks.

But as Maple Leafs insider James Mirtle of The Athletic states: “Not sure if I’d try to sneak him through waivers again though…”

The important thing is that it is no big deal for Vintage Spezza, who is just focused on playing well when he is on the ice with his teammates. And he surely deserves to be after Thursday night’s performance.