NHL News : Jalen Smereck explains exactly what happened in lead up to racist gesture from opponent

This story just keep getting worse and worse. Kick this joker out of the league forever. 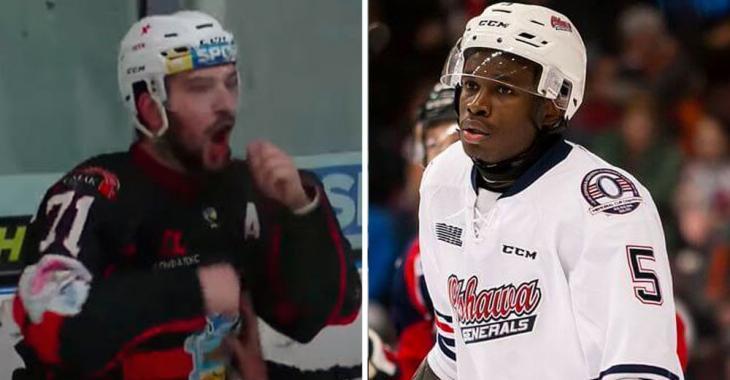 In case you missed the news this past weekend, Jalen Smereck, a black hockey player who spent time in the Arizona Coyotes organization and who was subjected to a racist gesture during a Ukrainian Hockey League game that earned HC Kremenchuk forward Andrey Denyskin a pathetic 13 game suspension and $5000 Ukrainian ruble (Approx $2000 USD) fine.

The incident, for those unaware, occurred during a game between HC Donbass, whom Smereck plays for, and HC Kremenchuk. between whistles, Smereck and Denyskin appeared to share words when Denyskin went way, way, waaaay over the line by miming peeling a banana and eating it. The intent, I suppose, was to compare the dark skinned Smereck to an ape.

Here's the gesture in question:

It's obviously a disturbing act and it's the wort of thing that makes you wonder just what the Hell Denyskin was thinking!?!? I mean... did he think he'd just get away with this? Was he thinking he'd done something really clever?

Thankfully, Smereck himself spoke with ESPN's Greg Wyshynski and gave us a little insight into exactly what happened leading up to the gesture.

Check it out courtesy of Wyshynski and ESPN:

"There wasn't a scrum or anything between me and this guy. I know a lot of the stories were saying that. He was fighting one of my teammates. He was on top of him, on the ground. He threw four or five punches while he was on the ground," Smereck said. "In North America, a guy does that, and [a teammate] is going to try and step in right away. So I tried to step in. One of my teammates grabbed me and a linesman grabbed me."

So if I'm following along correctly Denyskin chickened out of a fight and then decided to make his gesture while Smereck was far enough away and under the control of an official? What a piece of work this guy is...