NHL News : Jakub Voracek disciplined after lashing out at reporter. 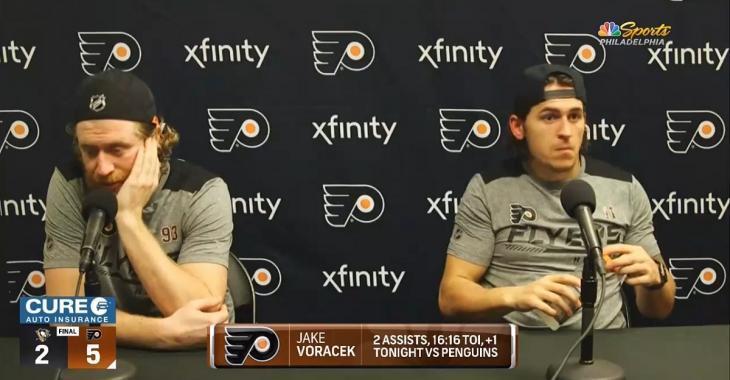 In case you missed it, one of the funniest moments of the past week in the National Hockey League was Philadelphia Flyers forward Jakub Voracek going off on a reporter during a virtual press conference.

During the press conference Voracek was asked a question by reporter Mike Sielski of the Philadelphia Inquirer and for one reason or another he simply was not having it. Now to be clear Sielski's question was perfectly reasonable, but it would seem that something Sielski had written recently or in the past had been gnawing at Voracek who finally felt the need to let it all out.

The Flyers forward then made a half hearted attempt at actually addressing the question before adding:

"I wasn't even gonna answer your question because you are such a weasel it's not even funny."

Needless to say Voracek was not very subtle about letting Sielski how he felt, but it seems as though the National Hockey League may not have appreciated the gesture as much as Voracek's fans did.

According to a report from Philadelphia Flyers insider Sam Carchidi, Voracek was actually disciplined by the league over this incident. We don't know exactly how severe that discipline was, but we do know for certain that the league at the very least spoke to Voracek about the incident that took place following the Flyers win over the Penguins on Friday.

NHL Deputy Commissioner Bill Daly did confirm that the league had a "discussion" with the Flyers forward but would not comment on whether or not the league had issued a fine to Voracek over the incident.

I don't want to see players getting in the habit of verbally abusing reporters they don't like, but I must admit I am a little disappointed that the NHL felt the need to step in here. If anything hockey players have a reputation for showing too little personality, so when rare moments like this happen they actually generate a lot of excitement as as the case this time around.

Something tells me that, even if he was fined for his comments, Voracek has no regrets.

NHL rocked hard today, more than a dozen players added to protocol list
Subscibe to
Our NEWSLETTER
Receive the best articles of the web directly in your email