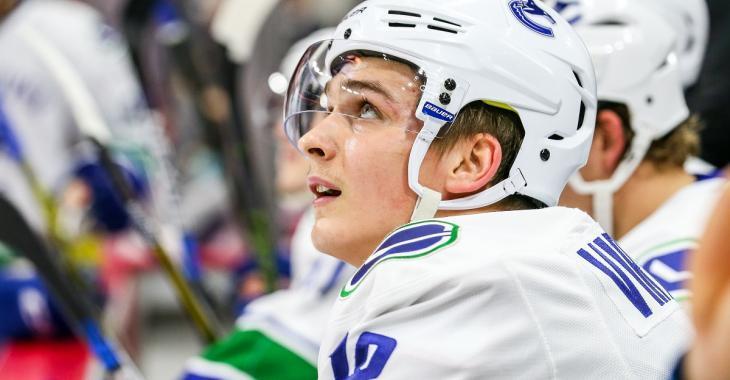 The Vancouver Canucks had a notable absence from practice on Saturday morning and the timing of this absence have lent credence in the minds of some to very serious allegations that have recently been circulating on social media. The allegations involved Canucks forward Jake Virtanen and fall into the category of sexual assault although, as I will stress several times throughout this article, these are only unproven allegations at this time.

First and foremost let's get to the official news. National Hockey League insider Chris Johnston has confirmed that Virtanen was not on the ice for practice on Saturday morning, this in spite of the fact that the Canucks are set to face off against the Toronto Maple Leafs later this evening.

Virtanen's absence comes fresh off the heels of very serious allegations that have been making their rounds on social media, accusations that sound very much like they would amount to rape if they are indeed true. Of course given that anyone can say anything they want on the internet, it is very important to remember that Virtanen should be considered innocent until proven guilty of any crime. In fact it may very well be that Virtanen's absence comes as a result of his desire to vindicate himself of these accusations as quickly as possible, perhaps even taking legal action to do so.

The allegations first surfaced when screen shots of a conversation were published online, a conversation in which a female that claims to have been 18 years old at the time of her interaction with Virtanen suggests that she was violated by the Canucks forward. Here is what she said online, describing an incident that took place in 2017, unedited and in full:

We had met in the Summer, and spent the rest of it talking, looking forward to seeing each other that Fall. When I finally visited Vancouver that September, he wanted to meet up one night but it was late so I suggested another day. He insisted on picking me up that night. I was staying with friends in North Van and I knew he lived around an hour away so I thought I’d be safe knowing he wasn’t just taking me back to his house and being put in a position I didn’t want to be in.

After he picked me up I found out the team had them staying in a hotel and without asking or even telling me what was going on he drove me right to the hotel.

As soon as we pulled up I felt uneasy but I figured I could go in and be safe. When we got into the room I was looking out on the balcony and he immediately came up behind me started putting his hands all over me and kissing my neck. I kind of shrugged him off then he put Netflix on. Within a couple minutes of the movie being on he started making out with me, I’d go along for a minute then pull away as I didn’t want things to escalate.It wasn’t long before he took off my shirt and as he did I said, "I don’t want to have sex" he said it was okay and we didn’t have to. Right after he went to unhook my bra, again I said, “I seriously don’t want to have sex with you” and again he assured me it was ok and we didn’t have to. We would kiss on and off but as soon as he would try to go further I’d again say no and he just kept reassuring me.

He started taking off my pants complimenting me, telling me they were "nice pants" and again I said, "I don’t want to have sex with you, I’m serious" and again he reassured me we wouldn’t. It then got to the point where he kept kissing me and escalating things so I shot up and said "okay, maybe I should leave". He then kind of snapped out of it and said, "no, no if you really don’t want to we don’t have to", and for some reason I believed him and laid back down.

No longer than 5 minutes went by and he was all over me, kissing me, being more persistent than ever. He had taken off his pants at some point during that time, and I found myself physically holding his hips off of me trying to keep him from going inside me while saying "no I don’t want to do this, I’ve said no" and he would say "just a little bit, come on just a little bit". We went back and forth like that till it got to the point that I physically couldn’t hold him off any longer, and after saying no well over a dozen times I just laid there, staring at the ceiling waiting for him to finish.I went in the bathroom and cried. When I came out he was trying to be all loving, saying "come on sugs, come cudds at least".

He had told me earlier that he would drive me home but just made me sleep there instead. My eyes were wide open till I finally fell asleep. I asked him to drive me home in the morning and instead he was just going about his day, showering and getting ready acting like everything was good. Then told me he couldn’t drive me because he had to go to practice and just left me with money for a cab.

I was so disgusted and conflicted about what had just happened, whether it was my fault for going in the hotel and my fault for not just leaving when I threatened to. I was 18 at the time and completely sober so I was fully aware of what was going on.

With him being in a high position of professional hockey, almost no one believed that I didn’t want to, that he assaulted me and that he didn’t take no for an answer.

Rumours circulated and people made it seem like something I should be proud of and "props" to me for sleeping with an NHL player.No one really believed that I genuinely felt violated and those who did just questioned me for not doing more to prevent it.

Update: Reporter Allan Kelly of Glacier Media is now claiming to have spoken to the victim directly, a woman she refers to as "Emily" in order to protect her identity, adding that a Canucks spokesperson has reached out to confirm that Virtanen has now been placed on leave by the team as a result of these accusations.

"We have become aware of the concerning allegations made about one of our players. Our organization does not accept sexual misconduct of any kind and the claims as reported are being treated very seriously by us," said a Canucks spokesperson as per Glacier Media. "We have engaged external expertise to assist in an independent investigation and we have placed the player on leave as we await more information."

Again I must stress that Virtanen should be presumed innocent until proven guilty, however these are incredibly serious allegations and there is no question that this is the correct move on the part of the Canucks as they await more information.

Dominique Ducharme hints at his lineup for Game 3.
Subscibe to
Our NEWSLETTER
Receive the best articles of the web directly in your email