NHL News : Jagr drops a bomb when talking about retirement 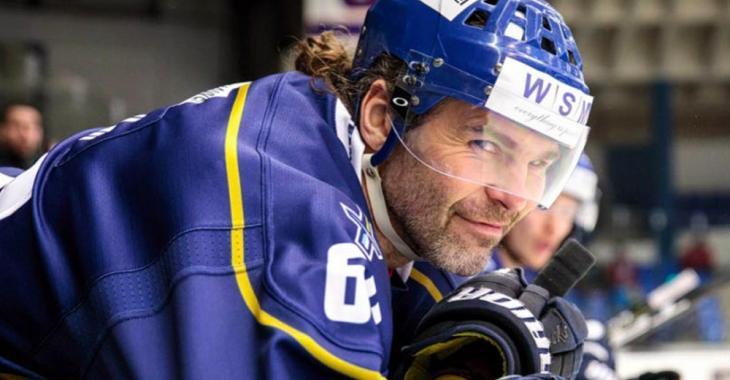 Jagr, now 48 years old, is still playing professional hockey in his native Czech Republic starring for his hometown team, the Kladno Knights. He put up an impressive 15 goals and 29 points in 38 games. Oh... and did I mention that he's the owner of the Kladno Knights? He's his own boss and he's effectively playing for free... he's just in it for the hockey at this point.

Of course, COVID-19 has rocked the Czech league this season and with cases surging across much of Europe there's no telling when Jagr and his Kladno teammates will hit the ice again. Regardless, Jagr is staying in shape but he admits that he's not pushing himself as hard as he has in past seasons.

"This year is very different from the usual ones. We don't know what awaits us the next day, which takes a lot of energy. I haven't trained as hard this year as in previous years. But I still want to play this season. I think it could happen in the playoffs. I want to be a player who will help his team win. Who will help him advance to the top competition. And at the moment I am not such a player, "said Jágr to NHL.com.

Jagr admits that his heart really isn't in it anymore, but that he's committed to playing for Kladno for at least one more season so that he can fulfill his promise of playing in an outdoor game for the club.

"I can't say how much longer I want to play. Hockey is getting harder and harder for me. I think I lost a bit of a drive when I wanted to prove that I can keep improving. That motivation is waning, although this season is definitely not the last in my career. I was supposed to play this year (open air match), but it was postponed. So I can't finish now. I promised to start in that match. "

An outdoor game festival in the Krkonoše Mountains was planned for this past season but had to be postponed until December 9-11th, 2021.

"It is a cross-section of Czech hockey and a unique event, a great idea and event that sport and hockey really need in this period in particular," Jagr said about the festival. "In any case, I believe that all interested clubs and partners will maintain our favor and support this unique event in 2021."

An outdoor game in the Czech mountains featuring Jagr? Uh... when can we travel outside the country again? I'd absolutely DIE to see this game in person, especially if it ends up being Jagr's final professional game.

Report: Apparent bidding war brewing over UFA Travis Hamonic
Subscibe to
Our NEWSLETTER
Receive the best articles of the web directly in your email