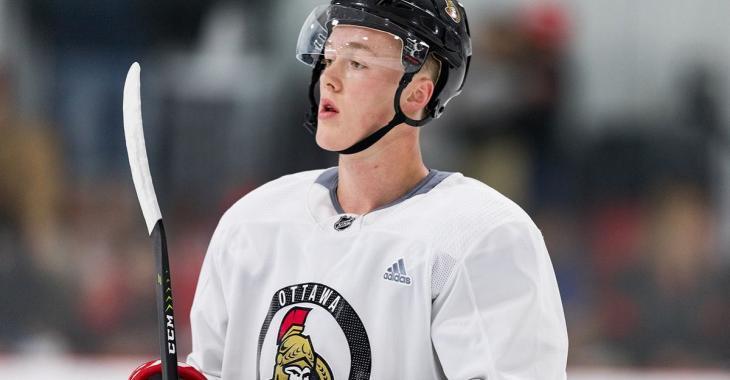 This one was tough to watch, especially given the context that this kid was one of the top picks in the draft in 2018, being selected in the first round (26th overall) by the Ottawa Senators.

On Friday the University of North Dakota Fighting Hawks faced off against Miami University's RedHawks and it was during that games third period that defenseman Jacob Bernard-Docker took a series of gut wrenching blows to the head. Now to be clear here these were not the result of some dirty hit or cheap shot from an opposing player, but rather very unfortunate circumstances that converged at the worst possible time for the 20 year old native of Canmore, Alberta.

The first blow to the head came when Bernard-Docker lost his footing right at the goal line and fell awkwardly into the boards. Instead of falling straight in one direction or another, Bernard-Docker's body twisted at a weird angle that resulted in his head taking the full impact of his body weight against the boards. The blow to the head clearly hurt the young man and he would stay down on the ice for what felt like a very long length of time, but unfortunately for him no whistle was blown.

Now I can appreciate not wanting to interrupt the flow of the game, however what would happen next would turn an unfortunate blow to the head into a sickening situation for this poor young man. As the play continued to flow the RedHawks maintained control of the puck and, as you would expect with a defenseman out of the play, it was effectively a big time power play for the opposing team. Unfortunately instead of putting a shot on goal, the RedHawks put a shot right into the side of Bernard-Dockers head as he lay on the ice, completely defenseless and unable to protect himself from the incoming puck.

This was made even more disturbing with the added context of the recent injury to Dynamo youth captain Timur Fayzutdinov, who is currently fighting for his life in intensive care after taking a puck off the side of his head.

Bernard-Docker would obviously leave the game, and we hope he's going to be ok.