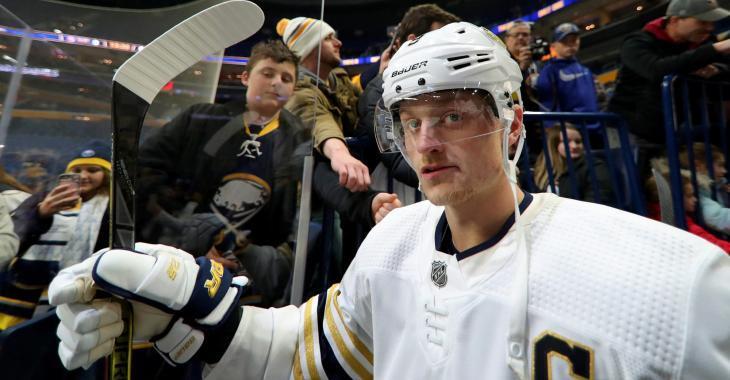 The Jack-Eichel-wants-out-of-Buffalo rumours were back on the table, but Sabres general manager Kevyn Adams has just cleaned them off of it!

On Friday, Adams met with reporters in an emotional press conference to speak from his heart about his team’s disastrous season.

Adams not only refused to give his head coach Ralph Krueger has vote of confidence stating he was evaluating every move possible.

However, he made sure to let everyone know that captain Eichel has not demanded a trade out of Buffalo. He says he and Eichel have an open line of communication.

Adams added this: "Jack is one of the best players in the world. Are people going to make a phone call and ask (about his availability)? Yes, but that's the extent of it."

Last season when things were as bad, Eichel had voiced his frustration and rumours emerged that the star forward might want out of Buffalo. As the Sabres struggle in this shortened season, most pundits assumed he would want out again, with rumours of teams like the Los Angeles Kings and New York Rangers being in the mix to land Eichel.

Eichel’s no-move clause does not kick in until the 2022-23 season, the year he would have normally been eligible for unrestricted free agency, so he wouldn’t be in control if he did request to be moved.

However, as of today, Adams maintains that Eichel wants to stay in Buffalo, where he’s yet to make the postseason…

Eichel might not have wanted out until now, but with this press conference in which Adams called the Sabres' performance unacceptable, he might reconsider...

Rumor: Failed trade that led to Rutherford's resignation involved the Leafs & Habs.
Subscibe to
Our NEWSLETTER
Receive the best articles of the web directly in your email