It looks so much worse. 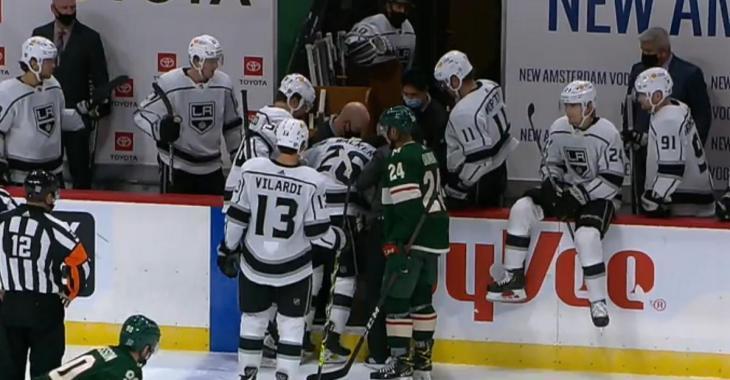 This week in the National Hockey League was witness to one of the worst-looking injuries that we have seen on hockey's biggest stage in quite some time. Although players have suffered injuries that were more severe in recent memory, the injury to Los Angeles Kings defenseman Sean Walker stunned fans due to the fact that his injury was clearly visible all across the ice from the Kings' goal to the Kings' bench.

Walker was the victim of an errant puck, but rather than a deflection that had gone wrong this was a wind up slapshot from the blueline courtesy of Minnesota Wild defenseman Matt Dumba that badly missed the mark. Unfortunately for Walker, instead of finding the back of the net Dumba's shot found the side of his nose. Although it's hard to tell exactly where he was hit, it would appear that the puck struck Walker in the crook of his nose just below the eye and on the edge of his cheek.

Here's a replay of the incident:

The damage to Walker's face was easy to see from the moment the puck struck him as he leaked all over the ice, but as bad as things looked at the time though it would not be until we would see the aftermath of the damage to Walker's face that the seriousness of his injury truly hit home. To say that his face looked like it had been mutated would be an understatement, his nose had ballooned to a nearly comical degree and although his eye appeared to have thankfully avoided any kind of direct impact it was also noticeably swollen shut.

My goodness that must have hurt.

As you would expect from the hockey community, everyone is understandably concerned about Walker's well being following this rather gruesome injury, and the good news is it sounds like he's going to be alright. The latest on Walker comes to us courtesy of Kings insider John Hoven who reports that both Walker and Matt Roy, who was also injured against the Wild, are doing better. The Kings are expected to provide a more detailed update on both men but we will have to wait until Monday to know more.

Penguins honor Sidney Crosby before his 1000th NHL game tonight.
Subscibe to
Our NEWSLETTER
Receive the best articles of the web directly in your email