This story has taken over the NHL. 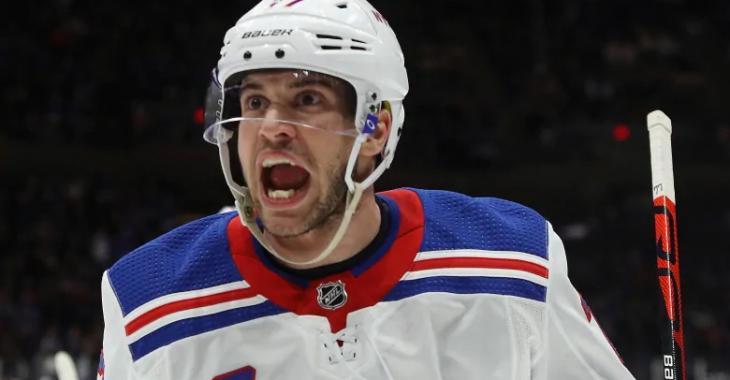 New York Rangers general manager Jeff Gorton made it clear on Monday: defenseman Tony DeAngelo has played his final game with the club.

DeAngelo was placed on waivers Sunday and went unclaimed  Monday. This happened after New York’s overtime loss to the Pittsburgh Penguins. DeAngelo and goaltender Alexandar Georgiev were involved in an altercation that was quickly broken up by a teammate.

And this came after a long history of unapologetic history of abuse and bigotry, Donald Trump support and COVID-19 denialism…

On Tuesday, Elliotte Friedman shared the latest update on the DeAngelo trade rumours in his latest 31 Thoughts column on Sportsnet, revealing the Rangers were willing to absorb part of his salary.

“The Rangers have made it clear they will eat salary to facilitate a Tony DeAngelo trade. GM Jeff Gorton provided clarity on why DeAngelo was cut: The organization felt DeAngelo “wasn’t able to move on” from his early-season benching and warned him one more incident would be the end of his tenure.

“New York will try to trade him, but it’s not going to be easy. Any acquiring team knows there will be heat. Gorton indicated the Rangers currently are not pursuing a termination of DeAngelo’s contract, and it appears unlikely they’d be able to do it unless the player agreed, for whatever reason. Since he does not turn 26 until October, he can be bought out for one-third of the $5.3-million salary on his contract for 2021–22.”

It’s been a rapid descent for DeAngelo… and we cannot imagine where he could be traded, unless the KHL, who does not seem to care about players’ behavioural issues, gets in the mix.

Two NHL players facing suspension after first preseason weekend.
Subscibe to
Our NEWSLETTER
Receive the best articles of the web directly in your email