A big hit that may have led to another. 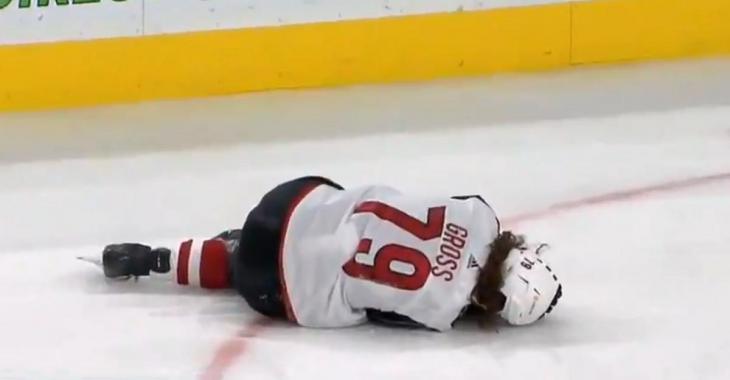 The Las Vegas Golden Knights and the Arizona Coyotes faced off on Sunday afternoon in what was a tightly contested and physical game. In fact the game had such a playoff atmosphere about it that I have seen more than a few fans hoping that they get to see a 7 game series between these two squads when the playoffs roll around.

It was veteran forward Ryan Reaves who set the tone early on in the first period when he delivered a devastating hit to Arizona Coyotes defenseman Jordan Gross who was injured on the play. It was an unfortunate turn of events for Gross who has appeared in a total of just 7 National Hockey League games this season, but the injury is not what I would have expected after watching the hit myself.

Although it looked like Reaves may have caught Gross up high on this one, the Coyotes themselves have since reported that Jordan Gross is out due to a lower body injury. This would lead me to speculate that it wasn't the fact that Reaves caught him high that resulted in him leaving the game, but perhaps he twisted something or injured himself somehow when he fell to the ice.

Here's a replay of the hit:

Whether or not the hit was high, the Coyotes certainly did not like it. The level of physicality in the game ramped up considerably following that hit and it wasn't all that long before the Coyotes went after some of Vegas' biggest names, perhaps in retaliation for the hit on Gross. This one was courtesy of Arizona's Conor Garland and it was a devastating hip check delivered to the lower body of Golden Knights star Mark Stone.

Here is a replay of the hit from Garland to Stone:

As you can tell from the replay the Golden Knights were none too pleased about this hit from Garland, although based on the body language of Stone I think it is safe to suggest that he walked away from this one relatively unscathed. Stone even got himself involved in the melee that would ensue following the hip check, and there have been no reports of an injury from the Golden Knights.

I certainly wouldn't mind watching that 7 game series if it does come to pass.

Update: It would appear that Gross has also suffered an upper-body injury as well with Coyotes insider Craig Morgan reporting that he has suffered a concussion.