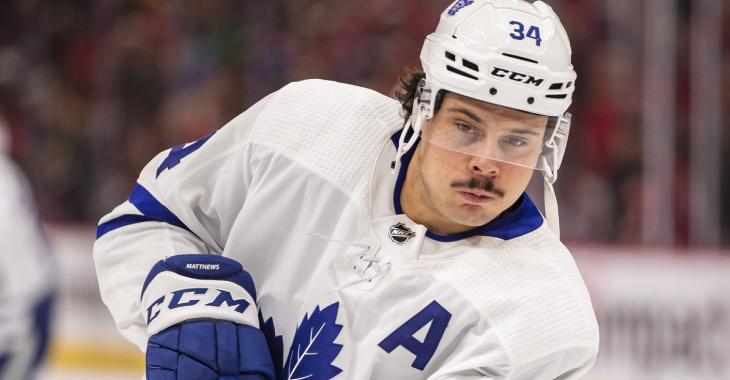 The Toronto Maple Leafs have been dealing with some relatively minor, but important, injuries to their lineup and although we did not get an official update from the organization itself on Monday we were able to garner some interesting information from how the team behaved on the ice.

First and foremost the big question on everyone's mind is whether or not star forward Auston Matthews will return to the lineup this evening to face the Edmonton Oilers. Matthews has been sidelined with what is believed to be a relatively minor wrist ailment, but given their current position at the top of the standings there is a belief that the Leafs are giving Matthews extra time off to try and get back to 100%.

If that is indeed the case it sounds now like the trend will continue on Monday and there were a couple of signs pointing in that direction. The first came courtesy of Oilers reporter Ryan Rishaug who shared a video of Matthews at practice talking with the Leafs training staff. Rishaug indicated that Matthews was going pretty light out there, a sign that he was still recovering from his wrist injury.

Although Matthews would pick up the pace throughout the duration of the practice, a potential sign that he would suit up this evening, the fact that he remained out on the ice for so long suggests that he is getting another night off. So confident was Oilers reporter Mark Spector, after seeing Matthews skating hard well after some of this other teammates had cleared out, that he stated there is "no way" Matthews will play this evening.

This was the big development from practice but there was another interesting detail from today's practice that also potentially provided us with something of an injury update. Both Frederik Andersen and Jack Campbell are currently dealing with injuries as well and although both men were out on the ice on Monday it sounds like neither of them will get the start. Instead it was veteran backup Michael Hutchinson who was in the starter's net for the Maple Leafs on Monday, a sign that the Leafs want to give their goalies some extra time to recover as well.

Having Matthews out and Hutchinson in will certainly provide the Oilers with a great chance to get a win back after largely being dominated by the Leafs over the weekend.

Injury updates on Smith, Miller, and Grzelcyk from the Bruins.
Subscibe to
Our NEWSLETTER
Receive the best articles of the web directly in your email