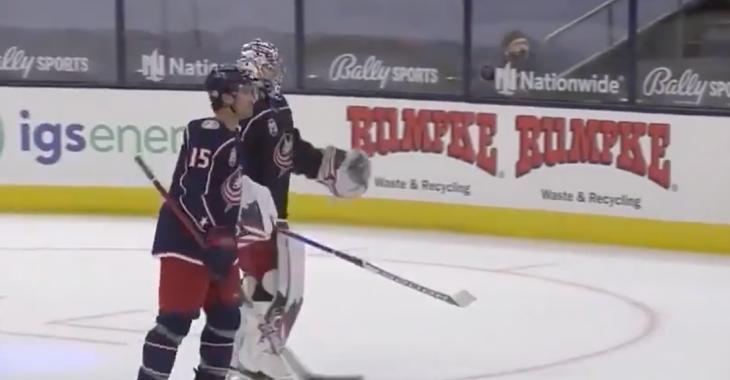 At the trade deadline, Columbus Blue Jackets captain Nick Foligno was traded to the Toronto Maple Leafs in a move that was not only tough on the team and the fans, but the forward as well.

There is no doubt that Foligno is excited to compete for a contender and get a shot at the winning the Stanley Cup before hanging up the skates, however, there are already rumours that if Foligno, who’ll become an unrestricted free agent this summer, cannot get it done with the Maple Leafs this time around, will attempt to re-sign in Columbus to return home.

That would please fans and players on the Blue Jackets’ roster as we can understand how Foligno is dearly missed in Columbus.

We saw it first hand on Tuesday night when the Jackets beta the Detroit Red Wings 1-0 in a shootout. Goalie Elvis Merzļikins realized that he couldn’t celebrate the victory as he usually did with Foligno with their famous hug.

He ended up jumping and hugging himself on his own in a heartbreaking move that shows how much Foligno is missed in Columbus:

Somebody : hug the poor goalie please!

Rumblings of a one for one trade between the Panthers and Islanders.