NHL News : How one lucky Ottawa Senators fan took in Game 6 between Toronto and Montreal

One Ottawa Senators fan was able to catch Game 6 between Montreal and Ottawa - for free. 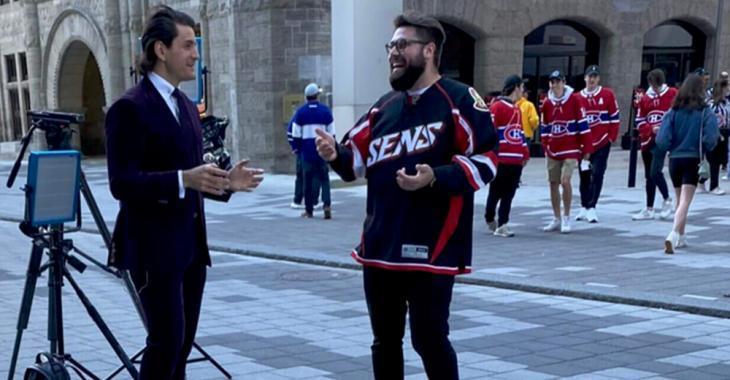 However, one fan of another Canadian franchise was able to be one of the precious few who took in one of the live matchups between the two sides.

Stewart Sabourin, a Montreal native who throws his allegiance behind the Ottawa Senators, scored free tickets to Game 6 at Bell Centre in Montreal thanks to his father's connections. And showed up wearing a Senators jersey in order to, as he put it, "create chaos".

“We were probably crazy for accepting the tickets. But we would have been even more crazy if we didn’t,” says Sabourin. “I knew a lot of people in Montreal weren’t going to be happy to see me at the game. So we knew we had to show up and create chaos.”

For Sabourin, cheering for the Senators despite living in rival territory became a part of him.

“It became part of my identity. When we had jersey day in high school, I was the only one wearing Sens gear,” says Sabourin. “And I always enjoyed it. It always felt like it was me against the world.”

Naturally, Sabourin and his girlfriend got more than a few odd looks from the 2,500 fans who were allowed to attend Game 6 on Saturday night.

“I think they were super confused,” laughs Sabourin. “They were speaking to us in English because they probably thought it was impossible that a Sens Sicko was actually from Montreal and would show up to watch a Habs playoff game in Montreal.”

“I’m a Sens fan, but there’s not a better place to be at playoff time than Montreal. This city comes alive, so it felt magical again on Saturday,” Sabourin says. “Walking into that building and getting that arena smell. And feeling the coldness of the ice. Then hearing the anthem. It was amazing.”

Sabourin was interviewed outside Bell Centre by Sportsnet reporter Shawn McKenzie, who took immediate notice of the Senators jersey.

“He took one look at my jersey and said, ‘What the hell are you doing here?'” said Sabourin.

Of course, though it wasn't his team, Sabourin was happy to be able to watch live hockey once again, and is looking forward to the day when he'll be back at Canadien Tire Centre.

“Even though it wasn’t Ottawa, it felt like home. But I cannot wait for us to be able to go to the Canadian Tire Centre again to watch games,” says Sabourin. “We deserve to watch playoff hockey of our own.”

Embarrassing officiating from Chris Lee and Dan O'Rourke continues in Game 4.
Subscibe to
Our NEWSLETTER
Receive the best articles of the web directly in your email