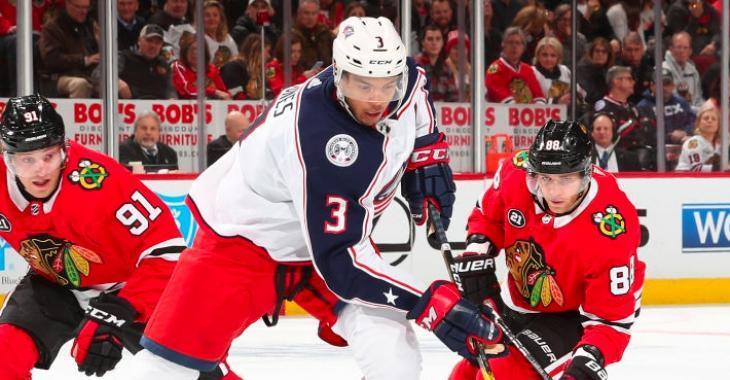 One story that is interesting to follow this offseason is the case of Seth Jones. He is is a bonafide top-pairing defenseman and when he revealed he would test free agency waters next summer and not re-sign with the Columbus Blue Jackets, we knew a trade was coming.

The Jackets have been looking to pull the trigger on a deal this summer, however contenders entering the Jones sweepstakes want to make sure that the blue liner will re-sign with them. We’ve recently heard that the Philadelphia Flyers were in the mix, however, word is that Jones isn’t looking to stay long-term in Philly.

However, the Chicago Blackhawks are interesting in Jones as well and might have just set the perfect plan to convince him to come to the Windy City.

On Monday, the Hawks completed a trade that shipped veteran defenseman Duncan Keith to Edmonton, and in the return package, the Oilers sent back defenseman Caleb Jones.

You get it now : Caleb is Seth’s younger brother.

As Matt Larkin of the Hockey News points out, it’s hard not to see what the Hawks are attempting to do here. They need to pursue a prominent right-shot defenseman, and Seth might be thrilled to join his brother in Chicago. He has just one year remaining on his deal at $5.4 million.

The Blackhawks are now rumoured to be frontrunners in these Jones sweepstakes as the blue liner might already inform them he will re-sign in Chicago following a trade.

Pairing the Jones brothers might the ultimate trade scenario for the Hawks. This is exciting : let’s continue to keep an eye on the Hawks’ action on the trade market in the coming days!

Milan Lucic, in his 1,000th game, drops the gloves, gets busted wide open but then drops Sabourin with a bomb
Subscibe to
Our NEWSLETTER
Receive the best articles of the web directly in your email