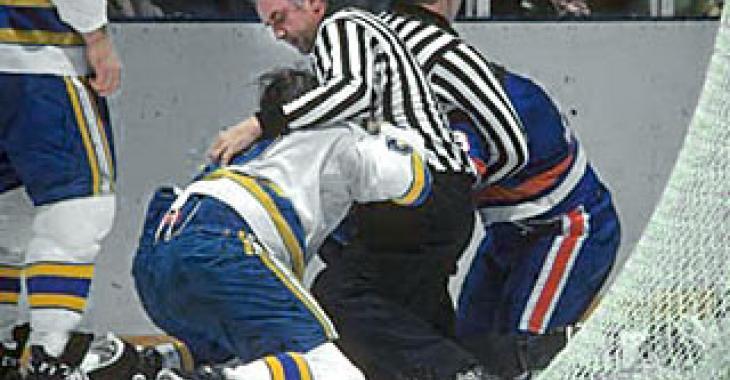 The world has lost a man who left an undeniable mark on the sport of hockey.

According to an official announcement from the St. Louis Blues organization on Sunday morning, Hockey Hall of Fame member Neil Armstrong has sadly passed away. We take some solace in the fact that at 88 years of age Armstrong lived a full and amazing life before his time would come.

Although Armstrong is not a household name among modern NHL fans he leaves an incredible mark on the sport of hockey in more ways than one. The first and most obvious is through his own career as an NHL linesman, one that began in 1957 and saw him officiate a whopping 1,744 NHL games without ever missing a single one. This earn him the nickname "ironman" a title he earned considering that this streak including officiating for a 3 month period with a cast on his broken hand. For his accomplishments as an NHL official he was inducted into the Hall of Fame in 1991, but you could argue that this was just the beginning for Armstrong.

Although Neil has passed his legacy will continue to live, and will continue to leave its mark for that matter, through his son Doug Armstrong. Armstrong is of course the general manager of the St. Louis Blues, a team that not so long ago captured a Stanley Cup title and added to the Armstrong legacy in the NHL. Doug looks like a man that has a lot of years left ahead of him in the National Hockey League so I am confident that there is still more to come that will add to Neil's story.

Our condolences go out to the Armstrong family and all of Neil's loved ones in this difficult time.

Patrik Laine leaves the ice in the middle of practice.