Jets taunted Perry after Scheifele’s hit on Evans: “You did the same thing to Tavares!” 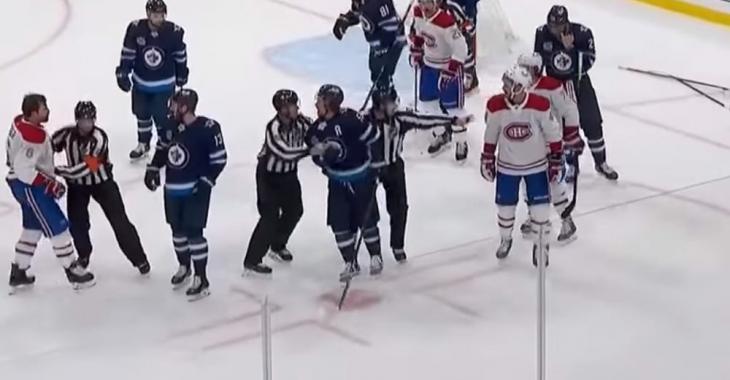 It was a scary scene in the last minute of Wednesday night’s Game 1 between the Winnipeg Jets and Montreal Canadiens.

As you know by now, Mark Scheifele was suspended four games for charging Habs’ Jake Evans, who was scoring an empty-net goal to cap a 5-3 win. Immediately after giving his team a two-goal lead, though, he got levelled by the Jets’ star forward on a hard, high and unsuspecting hit.

It took several minutes to tend to Evans, get him safe and onto the stretcher and out of the arena to undergo evaluation by team doctors. During that time, Canadiens players were worried, and so were some of the Jets’, however, Renaud Lavoie of TVA Sports reported that some players from Winnipeg took the opportunity to call out veteran forward Corey Perry on the Montreal bench, telling him he did the same to Toronto Maple Leafs’ captain John Tavares in the first-round series.

As you may remember, Tavares was taken off the ice on a stretcher after a collision early in the first-round playoff matchup with the Montreal Canadiens. It was a freak accident: Tavares bumped into Habs defenseman Ben Chariot, fell to the ice where he was defenseless and hit by forward Corey Perry’s knee. Trainers and doctors from both teams rushed to the ice and attended to the veteran forward before he was taken away. He gave a thumbs up as he was wheeled off the ice and transported to hospital.

Huge difference! These Jets players acted like the hits were the same thing while Perry never intended to hit Tavares. The only similarity was that Tavares was also stretchered off the ice.

The altercation was getting out of control… Lavoie says that we came close to seeing the bench clear and full-on brawl, but Blake Wheeler told his teammates to shut up.

After the game, Wheeler sent his best to Evans. Never mentioned that he needed to stop a bench-clearing brawl in the process.

“Just hope he’s OK,” Wheeler said. “That’s it, really. That’s all. That’s the concern. It’s never good to see a guy on the ice for that amount of time, the stretcher out — it’s scary.”