NHL News : Habs could be eliminated tonight if outbreak is confirmed in dressing room 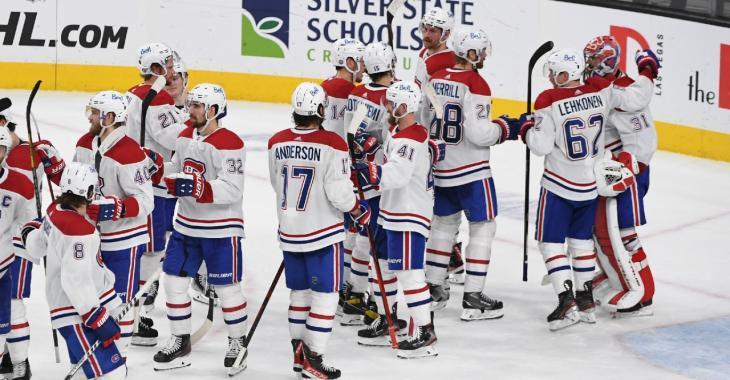 UPDATE: Minutes after posting this article, the National Hockey League has just updated the Covid Protocol List for the day…No players have been added. No one from the Vegas Golden Knights, no one from the Montreal Canadiens, except for head coach Dominique Ducharme. It sounds like an outbreak is not taking place in the Habs' dressing room.

There will be a game tonight. Ducharme is expected to be replaced by Luke Richardson, who will run the bench along with Alex Burrows and Sean Burke. Marc Bergevin said that the team will be in contact with Quebec Health and the NHL to determine how long Ducharme will be absent.

As we await the list of COVID-19 protocols, which usually comes around this, Montreal Canadiens fans are extremely nervous to find out what comes next.

As Marc-Andre Perreault of TVA Sports just pointed out on the air of the show JiC, the NHL’s rules for the postseason indicates that if there is an outbreak in a team’s dressing, the club is automatically disqualified from contention, therefore, in this case, the Vegas Golden Knights would be moving on to the Stanley Cup finals.

That’s because, as you know, head coach Dominique Ducharme has tested positive for COVID-19 and will be sidelined for at least 10 days. The NHL is expected to come out with an official statement shortly as the rest of the team is getting results from a second test.

Earlier on Friday, it was revealed that Ducharme had irregularities in his daily COVID-19 test. Of course, the bench boss has been in contact with other coaches, staff and players, which is why we eagerly await the NHL’s protocols list to make sure all players are safe and tested negative to prevent an outbreak. Perreault repeated several times how this is a rule from the NHL in the postseason.

The series is now tied at a game apiece, and the Habs hold home-ice advantage in what becomes a best-of-five, with Game 3 set to go in front of a crowd of 3,500 at the Bell Centre. The Quebec government allowed more fans for this round as the Habs managed to get 2500 fans in the Bell Center in the first and second rounds of the postseason. This went up to an additional 1000 fans in the building, meaning 3500 fans will attend home contests for Game 3 and Game 4.

In Sin City, the crowd has been huge and loud and it was certainly a shock for the Habs’ players, who travelled to the States for the first time since March 2020, to see so many fans in the building. Premier François Legault has said Canadiens players told him they don’t want to be at a disadvantage, considering Vegas has been playing in a full arena.

This could be how Ducharme was vulnerable to the disease despite getting both doses of the Covid vaccine, and the Canadiens were strictly bubbled in Las Vegas, permitted to be only in their hotel and the rink.

Let’s hope to hear that this series will keep going.

Dolores Claman, composer of the Hockey Night In Canada theme song, has died.
Subscibe to
Our NEWSLETTER
Receive the best articles of the web directly in your email