Montreal's head coach revealed the extent to which some of his players had been playing hurt. 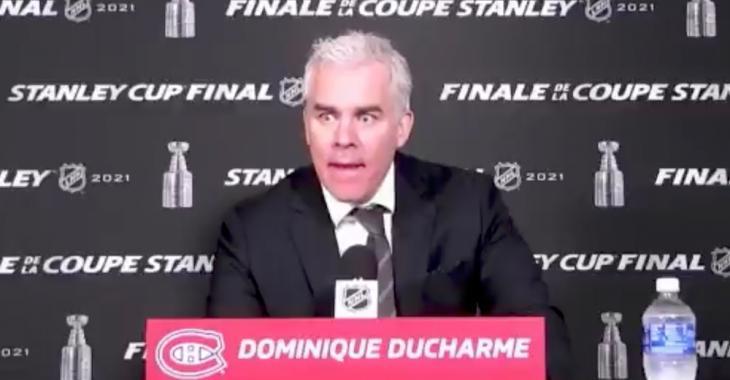 The Cinderella-style run for the Montreal Canadiens came to an untimely halt on Wednesday night, as they officially bowed out of the Stanley Cup Final at the hands of the Tampa Bay Lightning, who won their second straight championship thanks to their 1-0 victory in Game 5 in front of a packed Amalie Arena.

It was also a whirlwind season for head coach Dominique Ducharme, who succeeded the fired Claude Julien in February and led his team farther than anyone could have imagined during the course of the regular season and start of the Stanley Cup Playoffs.

Following the Game 5 loss, Ducharme revealed the extend of injuries that his players were fighting through all the way to the end.

“I don’t know if I forget other things, but a lot of guys banged up,” Ducharme said. “But they fought. They bled, they fought, they never quit. I'm proud of them.”

"I'm proud of this group," Ducharme continued. "I told the guys after the game. There's....we have to go through a lot of things, and you talk about practice, injuries, scheduling, COVID. Even through the playoffsb, being down and being up, many things. We kept moving forward and kept getting better. We grew as a team a lot. We gotta use that the right way, and we want to make it back here."

Ducharme himself overcame adversity with the coronavirus after he tested positive for the illness prior to Game 3 of their semifinal against the Vegas Golden Knights. He was required to quarantine for two weeks, and eventually found himself back behind the bench prior to his team's Game 3 at Bell Centre against the Lightning.

The Canadiens are certainly to be commended for their incredible run that began with a come-from-behind series victory against fellow Canadian and Original 6 rival Toronto, followed by upset victories over the favored Winnipeg Jets and Vegas Golden Knights. And of course, it's a testament to the players who battled through injury to lead the franchise as far as it had advanced in nearly three decades.