WARNING | Tough images. The poor King was hit in the face by a Matt Dumba slap shot last night. 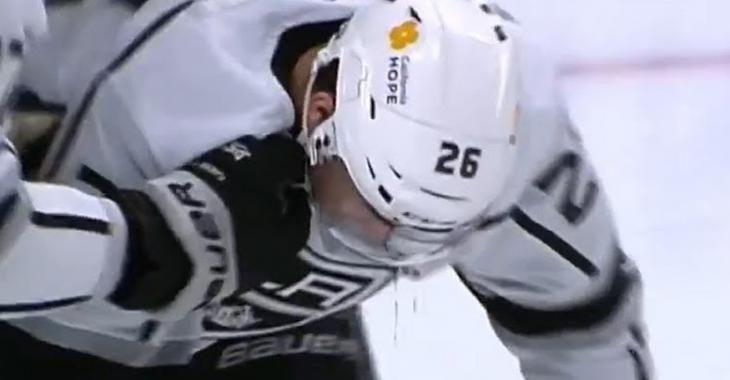 Yeah, this is going to leave a mark…

During Thursday night’s game between the Los Angeles Kings and Minnesota Wild, defenseman Matt Dumba just wanted to put the puck in the net. The Wild blue liner snapped the puck, which came out like a cannon ball, but ended up on poor Kings’ Sean Walker’s face, who was standing in front of his goalie.

Walker immediately went down on the ice in pain and his face bloodied up quite quickly, he needed help to get off the ice. It was clear after the incident that Dumba felt horrible about catching Walker in the face as many insiders noted how the defenseman was feeling at his team’s bench. He even attempted to apologize to Walker before he left the ice.

Check out what happened, but you sent you this warning : seeing this will hurt your face!

Later on Friday, a picture of Walker’s injuries surfaced on social media and it looks gruesome. The poor guy is going to remember this for a long time, and so will his face.

Head coach Todd McLellan mentioned in his postgame interview that Walker was seeing a doctor for his injuries, and as you can see on the picture above, he needed a lot of stitches to stop the bleeding.

After the game, Dumba was distraught when asked about what happened to Walker.

“I feel so bad about it. It’s got to be one of the worst shots I’ve taken in my career. I feel so bad. I’ve got to go apologize after this.”

I don’t know about yours, but my face hurts!