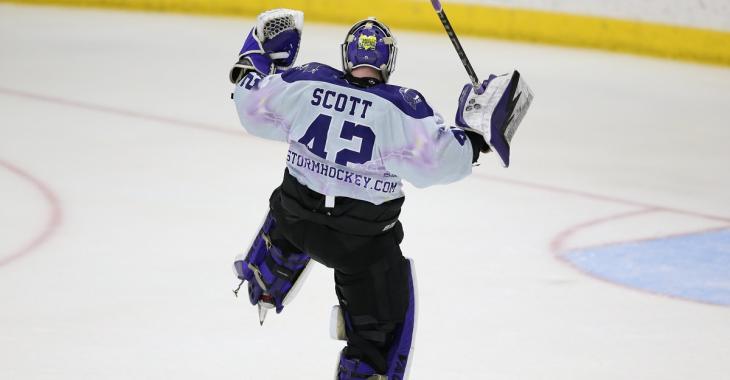 There's a reason we all love the wonderful sport of hockey and it's because of special moments like this one.

Over the weekend goaltender Todd Scott created a moment he likely will never forget for the rest of his life when he recorded an ultra rare goalie-goal by firing the puck all the way from behind his own net, into the empty net on the other side of the ice. Scott, who plays junior hockey in the United States Hockey League with the Tri City Storm, was taking on the Sioux Falls Stampede and with his team up by a score of 6 - 4 late in the game, the Stampede made the decision to pull their goalie.

That was when the magic happened and although the goal itself is very impressive and as I've already stated very rare, the celebration that came after the fact was even better. Scott was clearly elated at having managed to score a goal and he could not contain his emotions, skating up to his own team's bench and hoping up and down pads and all the entire way. So caught up in the moment was Scott that he was actually awarded a two minute minor penalty as a result of his excessive celebration, but the best part was that absolutely no one cared about the penalty.

What helped make this an extra special moment however was the fact that there were a limited number of fans in attendance, and as you would expect a goal of this nature caused them to erupt in cheers. Even though there were far fewer fans than normal there was an audible roar in the building, the likes of which has been sorely missing from most games in the National Hockey League this season.

You can check out the replay of Scott's rather amazing shot right here:

As I said Scott potentially put his team in a dangerous situation, although probably not really with a 3 goal lead at that point, by picking up a minor penalty for his celebration, but if the reaction of his teammates following the game was any indication, they weren't the least bit concerned about it. Some of them seemed to be even happier for Scott than he was himself.