He's taking his talents to Toronto. 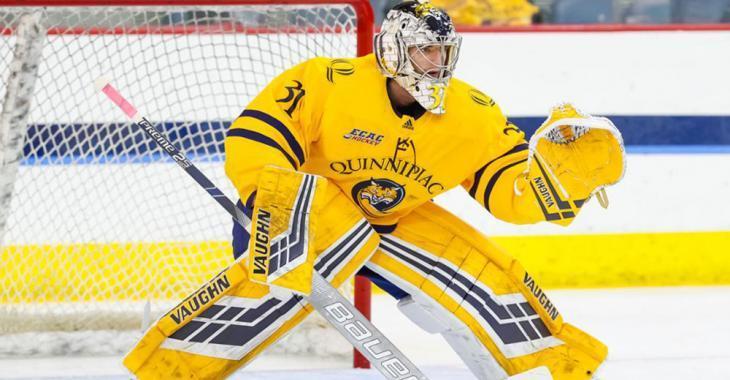 Fans of the Detroit Red Wings can be excused if they got excited at the thought of a 6’5 goaltender manning their crease.

Of course, team management felt the same way, and that’s the vision they had when they drafted Keith Petruzzelli in the third round (88th overall) in the 2017 NHL Entry Draft.

However, he decided to apparently say "thanks but no thanks" to the Red Wings, electing instead to become a free-agent.

And now, we know his next destination in his professional career. According to multiple reports, Petruzzelli has signed with the Toronto Marlies, the American Hockey League affiliate of the Toronto Maple Leafs:

And let's just say, the Marlies and the Leafs organization are getting a good one. While playing with Quinnipiac University, he was named ECAC first-team all-star, the winner of the Mike Richter Award as the NCAA’s best goalie, and a finalist for the Hobey Baker Award as the NCAA’s most outstanding player. Oh, and he led his team to a conference title and NCAA Tournament appearance.