NHL News : Goalie Anton Forsberg gets claimed off waivers for the 2nd time this week! 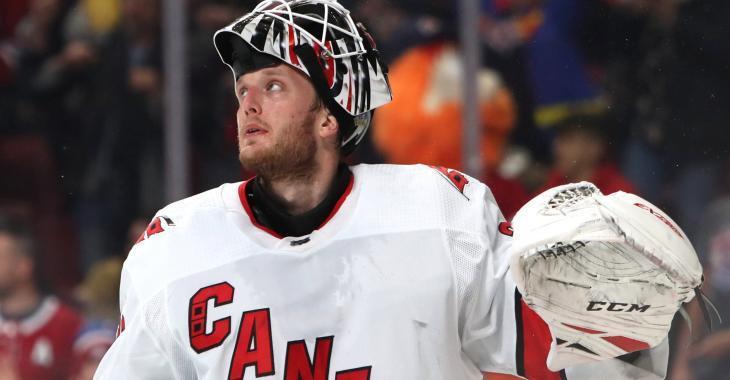 This has been a crazy week for veteran goalie Anton Forsberg. The 28-year-old netminder was placed on waivers by the Edmonton Oilers on Monday and was claimed by the Carolina Hurricanes, who started shopping him almost right away. He was therefore placed back on waivers on Thursday by the Canes, and some folks expected the Oilers to grab him back.

However, another Canadian team went on and got him off the waiver wire, as the Winnipeg Jets claimed Forsberg off waivers on Friday at noon.

It was expected that the Hurricanes would actively shop Forsberg as they have three goalies on their active roster plus Alex Nedeljkovic on the Taxi Squad. Many thought Edmonton wouldn’t hesitate to get him back as their third-string goalie is currently Stuart Skinner, a prospect with zero NHL experience and just under 50 games under his belt at the AHL level.

As Pierre LeBrun of TSN and The Athletic mentions, the Jets need to carry Forsberg on their NHL roster or put him back on waivers if they wish to send him to the Taco Bell Taxi Squad or the AHL.

He does believes the Jets will keep him on the NHL roster for now.

In other waivers news today, the Los Angeles Kings were the only other active team, placing Mark Alt and Troy Grosenick on the wire.

A “F— you Wilson” chant breaks out at TD Garden!
Subscibe to
Our NEWSLETTER
Receive the best articles of the web directly in your email