NHL News : Go behind the scenes with Bergevin's fiery F-bomb filled locker room speech prior to Habs win in Game 3 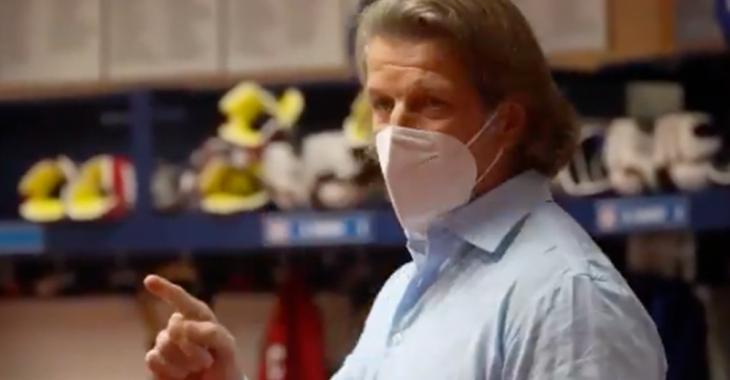 The Montreal Canadiens and Vegas Golden Knights have provided hockey fans with some fantastic entertainment in their best of seven semi-final series this past week with both teams splitting the series' first four games. We've got a 2-2 tie, turning this series into a best of three showdown with Game 5 on tap this evening. In short: it's been epic.

And if you thought the on-ice entertainment was enough, just wait until you go behind the scenes. The Canadiens recently shared a clip of general manager Marc Bergevin delivering a passion-fueled, F-bomb laden speech prior to the team's OT victory in Game 3.

I'm not sure that too many other NHL GM's out there are delivering a speech like this. I mean, do you think Lou Lamoriello is going to fire up the boys in the New York Islanders' dressing room tomorrow night? Not a chance. But that's part of Bergevin's charm, I suppose. You can be critical of the bold moves that he's made over his tenure with the team, but you can't say that the guy doesn't have passion. He wants to win as badly as anyone else and he wants to be the man to guide his team there. Bergevin isn't always my cup of tea, but I'll tip my hat to him this time.

As for the rest of this series, NHL officials Kelly Sutherland and Eric Furlatt have been called in to work Game 5 of the series this evening after some questionable officiating from veteran referee Chris Lee.

Officiating has obviously been a hot button issue in this series and the Canadiens and their fanbase have been absolutely giving it to the refs for unbalanced calls. Game 4 in particular had some bizarre non-calls against Vegas, to the point where Habs fans accused NHL referee Chris Lee of having it out for the team. Today though, those same Habs fans are learning to be careful what you wish for because swapping out Chris Lee for Kelly Sutherland isn't exactly some giant improvement. In fact, Sutherland has a bit of a history with the team going back years and years. Suffice it to say that Habs fans aren't exactly happy with today's announcement, even with Lee taken off the case.

Oilers trade Ethan Bear!
Subscibe to
Our NEWSLETTER
Receive the best articles of the web directly in your email